PETTITT: “ONCE HAMZA REALISES I HURT, HE’LL JUMP ON TO THE BACK FOOT AND RUN” 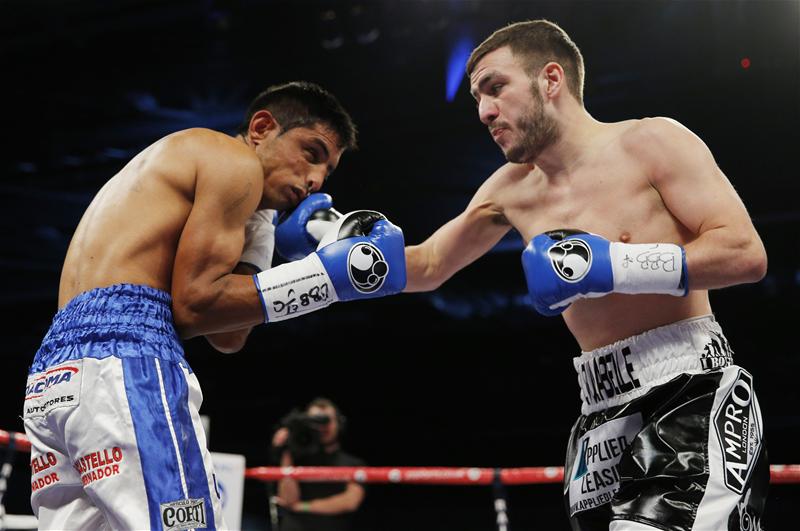 Former World-rated Super-Bantam Lewis Pettitt insists it could be curtains for his ring career at just 27, if he fails to repel unbeaten Brummie hotshot Raza Hamza in their quality Featherweight eight rounder at The O2 on April 14th.

‘I’m putting massive pressure on myself,’ claims the one-time Southern Area, WBA Inter-Continental and WBO European 122lb Champion who has triumphed in 20 of his 22 pro gigs.

‘Though I’m successful outside of boxing, I really love this sport. Raza is young enough to come again but if I don’t beat him I can’t see a way back. I won’t box again and that would break my heart.’

A veteran of six title fights (Hamza is yet to venture past round six), former England international Pettitt is two years senior and has engaged in 12 more fights and 89 more rounds than his feisty Brummie foe.

However, the suffocating pressure fighter from Erith in Kent has contested just a dozen rounds since conceding to Lincoln’s Bobby Jenkinson in a gruelling Commonwealth super-bantam clash in September 2015 and is acutely aware that this is no ‘gimme’.

‘By the time of the fight, I’ll have been out for 10 months so it’ll be tough,’ concedes the 5ft 4 ½ in former London amateur champ.

‘I’ve been training in the gym constantly since I lost to Jenkinson but, without fights, my weight can balloon above 11 stone. When I get annoyed, I eat! I got to around 9st last December, only for the show to get pulled. To be fair, Raza hasn’t boxed for a while either.’

The 5ft 10 in Hamza is a big Featherweight with a big talent. Half a foot taller, the five time national junior Champion enters unbeaten in 10 (one draw) and his slate lists five first round stoppage wins with three of his four points victories by shut out.

But Pettitt knows he is an altogether stiffer proposition than anything the Midlander has encountered previously.

‘I’ve fought taller fellas my whole career and cut them down,’ he warns.

‘The secret is good head movement and fast feet, in and out. Raza is threatening to come at me. I doubt he will but I really hope he does. Look, I can’t run away. If I let a taller guy control from the outside, I’m in for a hard night.

‘Raza has the size but fighting down south is a massive advantage for me. I’ve always been a huge ticket seller. My younger brother Jake is also on the bill and, between us, we sold roughly £18,000 worth of tickets for a show at Brentwood.

‘After a couple of rounds, reality will dawn for Hamza that he’s facing his first opponent who’s actually coming to win and there’s 400 people ringside baying for his blood. I just hope we get a good slot on the bill and there’s plenty of neutrals in the Arena to generate a real buzz. That will help me.

‘I doubt Raza has even boxed on an Arena bill whereas I’ve had half a dozen 10 or 12 round title fights. My experience is a big plus.

‘I’ve not seen much of Raza and I’ve no plans to watch him much before we fight. I prefer to respond to what happens when we’re in there.

‘I was ringside when he fought at Leicester last April but, no disrespect, wasn’t paying too much attention. That night, he came forward and walked down some import. I just remember he didn’t make best use of his (physical)attributes. Still, fair play to him for stepping up.’ 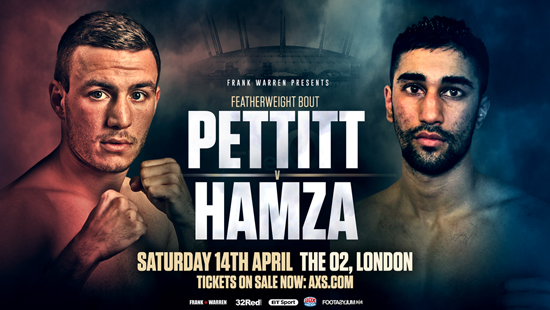 ‘I think Raza will try to establish himself early on but, once he realises I hurt, he’ll jump onto the back foot and run,’ predicts Pettitt who has halted nine opponents himself, in far more taxing company.

‘Shifting those last four pounds really drained me down at Super-Bantam. Almost all my stoppage wins have come up at 9st. I guarantee he’ll not come at me for eight rounds. He’ll find I hit far too hard.’

Tickets for April 14th priced from £40 (Tier) to £300 (Hospitality) are available to purchase via www.axs.com.