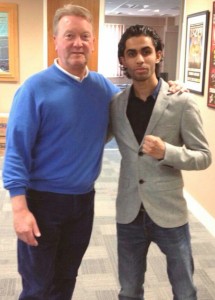 Hot flyweight prospect Prince Patel has signed a promotional deal with Queensberry Promotions as he looks to become British boxing’s next big star.

The flash and brash 22-year-old from Acton, London, made an explosive pro debut last month at the York Hall, Bethnal Green, blasting out Patrik Kovacs with a devastating left hook.

Patel’s ambition is to win and unify world titles starting at flyweight and believes that he could progress through each division to super-featherweight in his quest to be a British great.

“Frank Warren is an iconic figure in British Boxing and has promoted some of the biggest names in the sport so I’m thrilled to put my career in his hands at Queensberry Promotions,” Said Patel.

“He’s the very best in this business and I believe that he’s the man who will get me where I want to be in my career and that is a multiple time and multiple weight world champion and prove myself to be one of the British great,”

“I’ll be like a marmite type fighter, fans will either love me or hate me, but as long as they turn up at the arena or turn on BoxNation to see me win or get beat, I don’t care as long as they see me. I’m flashy and I like to entertain, but I love boxing and respect the sport and will always give it one hundred percent,”

“Domestically in the flyweight division I don’t see any real problems, there’s the amateur rivalry with Charlie Edwards to be settled and I’m sure we’ll meet down the line, but I know for a fact he had a questionable chin in the amateurs and that won’t improve in the pros so I’m confident of knocking him out if we do meet. If the opponents I’m facing can’t take the power they’ll get taken out, simple as that.”

Promoter Frank Warren, who’s last Prince – showman Naseem Hamed – went on to become the biggest attraction in world boxing during the mid-1990s, added, “I’m delighted to welcome the new Prince to Queensberry Promotions and look forward to working with him. He’s a young prospect and needs direction with his career and I’lI certainly give him that as we build him up. He looks like an exciting talent following his first round KO win last month and we’ll now establish some momentum with him.”