Prince Patel: “The Hate Mail Doesn’t Bother Me. It Motivates Me!”

If Acton flyweight Prince Patel fails to fulfil his goal of world domination, it certainly won’t be through lack of confidence.

A multiple national junior champion and England amateur rep, the Blackburn born Brentford FC fan announced himself to the profession in sizzling fashion by blitzing Slovakia’s Patrik Kovac in just 90 seconds at the York Hall in March.

The brash, flash foghorn returns to the scene of that crime this Friday (17th July) in a scheduled four rounder knowing as many are willing him to fail as succeed.

Remaining tickets are available from Ticketmaster on www.ticketmaster.co.uk

Boxing writer Glynn Evans tracked down boxing’s latest pantomime villain to investigate what all the fuss is about.

How did you first become involved in boxing?

I always wanted to be special in sport but I was never the greatest at rugby, football or cricket. To be honest, from a young age, I always enjoyed hitting people. Though I was small, I always used to stick up for myself.

I first went the gym when I was in Year Seven and passed through five clubs; Northolt, Dale Youth, Repton, Earlsfield and Billericay. I used to spar with both James DeGale and George Groves at the Dale.

What did you achieve as an amateur?

I won the English schools, two national CYPs and two Three Nations gold medals. I boxed for England nine times and for GB once.

My record was 36 wins in 53 fights with 24 stoppage wins. And only one of those was against an opponent without a head guard. I always carried serious power!

I went in the Senior ABAs four times, twice I was beaten in the London final, once in the national quarter finals and in 2013 I got disqualified in round two of the national final against Waleed Din from Sheffield. In their preview, Boxing News made comments about my discipline and I think the ref was just looking for an excuse to chuck me out.

I actually went up to the final on my own as Earlsfield had thrown me out of their gym! I just had some random London coach in my corner. I’m alright again with Sid (Khan, Earlsfield head coach) now.

What was the highlight of your amateur career?

I’d say the highlight of my amateur career was leaving the amateurs! I hated it, way too much politics. The officials demanded that you box a certain way. You weren’t allowed to express yourself.

Amateur boxing was just a learning process. My dream was always to win loads of pro world titles, never Olympic gold. I’m very confident in my ability to make a big impact in the pros.

Tell us about your back-up team now that you’re a pro?

I’m managed by ‘Uncle Frank’ (Warren) and I’ve been working closely with a pro coach Aaron McLiesh since 2010. Aaron’s got a fantastic boxing brain, so much knowledge. He’s a believer in dishing out abuse without taking anything back; every movement done for a reason. I love learning fresh routines for battle.

For those you’ve not seen you perform yet, stylewise, what can they expect?

Anything any other boxer does well, I can do better. I am the best in every facet of the game; quicker, power wise, skills, defence….find the best then multiply by 100! I’m equally comfortable southpaw or orthodox. I’ve more angles than a maths revision book.

I punch like a middleweight. I can only spar with much bigger guys – featherweights and lightweights – but they all fall. I’m a natural pure athlete.

And I’m as focussed on delivering entertainment as I am on winning. I’m a huge fan of wrestling; the build up, showmanship, entertainment factors. I sold 198 tickets for my debut and intend shifting a lot, lot more in future.

I’ve no time for hobbies. My whole life is focussed on boxing. Even when I’m not at the gym it’s all I think about. I eat, breath, sleep, dream boxing.

Given your unique style, who are your ring idols?

My boxing heroes  – other than myself (!) – are the thinkers, not the tough guys. Guys like Floyd (Mayweather) who hit but rarely get hit or Bernard Hopkins whose great defence has allowed him to have such longevity.

European medallist and two time ABA senior champion Charlie Edwards beat you five times out of six in the amateurs. Why would it be any different if you collided in the pros?

Two completely different sports. Amateur boxing is a sprint controlled by judges. It’s about who lands most punches, even if they’re just touch jabs.

I put Edwards over three times in the amateurs and as pros we’ll be fighting with far lighter gloves. He’ll be staying down. I’m also a better technical fighter.

The fight will happen but only when there’s some form of title on the line. Over the longer rounds, I’d hurt him.

Already I’m getting loads of hate mail on the Internet and social media networks. Does it bother me? Absolutely not. That’s what motivates me, that’s what forces me out the door to go running on those freezing, rainy winter nights.

It’s in my contract that I’ll be kept active. So I’d say I’m just a year off winning the British title and two years from winning a world title.

I intend to become a multiple weight world champion and remembered as a great. It will happen. I’m that damn good! 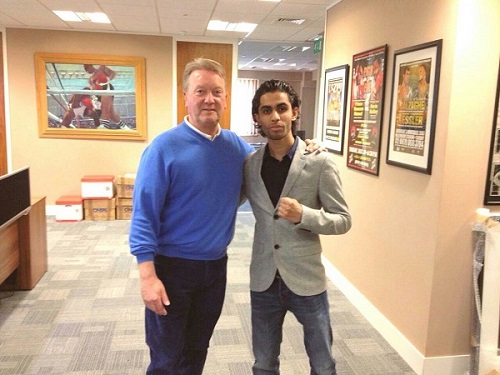