LANGFORD, THE BIRD MAN OF BOXING 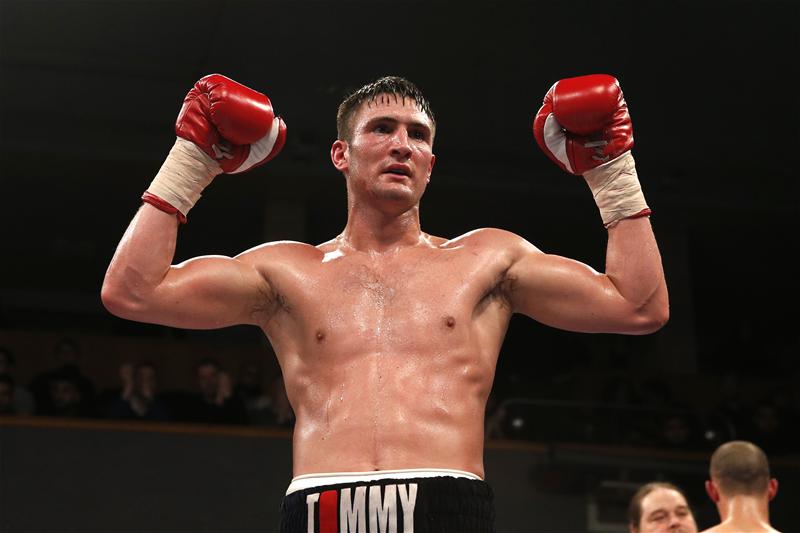 Tommy Langford is hoping to have a bird in tow when he steps out on his ringwalk ahead of his next contest on October 3.

No, not a female admirer. The lifelong West Bromwich Albion fan is seeking to be accompanied by the club’s beloved mascot that goes by the name of ‘Baggie Bird’, a giant throstle.

Quite how well this will be received the locals at Wolverhampton’s Civic Hall remains to be seen, but Langford is banking on his growing army of Albion fans booking out the Black Country venue.

Langford is set to defend the WBO Inter-Continental Middleweight title he won last time out, stopping Julio Cesar Avalos in four rounds at the National Stadium in Dublin. His return to combat on more familiar territory was met enthusiastically in West Midlands circles when he revealed his fight date on social media last week.

The 26-year-old is anticipating a bumper turn-out on his second visit to the Civic Hall this year with Langford suspecting obligations on the romance-front might just have nullified the numbers in attendance on his last appearance.

“I got a big reception from that tweet and it’s wicked because everyone is happy that I am fighting locally,” said the Birmingham resident who hails from Bideford in Devon. “In my last two, the one in February was on Valentine’s Day, which is a bit of an awkward date, then I boxed in Ireland. I think I am going to sell a lot of tickets for this one and it would be good if we can sell out the Civic.

“Because I have not boxed in the UK on a convenient date for a long time, it is a real opportunity to sell a lot of tickets. I am really looking forward to it.

“A lot of my early ones were in the Midlands and I was already selling a decent amount of tickets, but this year it has really taken off with all the added publicity of BoxNation and getting more exposure, the fanbase is building,” added Langford, who went on to explain why he hopes to be given the bird on his ringwalk.

“I’m hoping that is something the club can do because that would make it really easy and build a link there that potentially a year or two down the line where we could have a big show at the Hawthorns.” 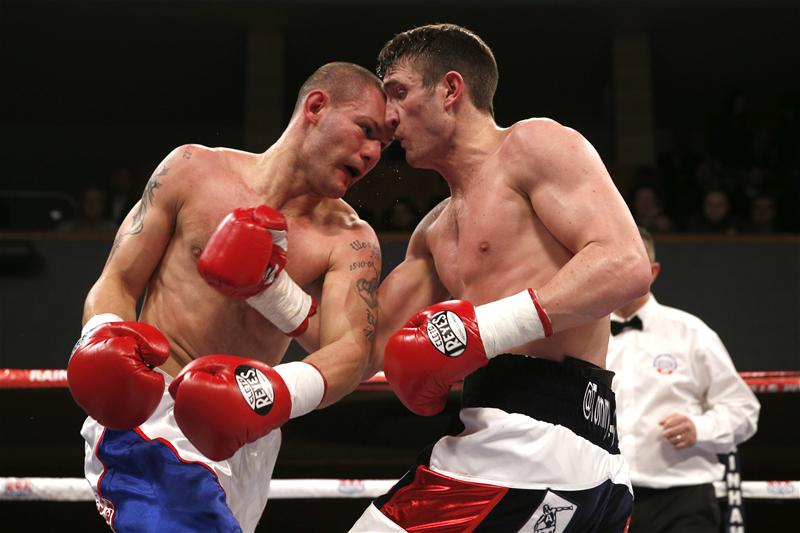 An avid affinity with a football club is a lucrative tool for talented boxers seeking to build a loyal following, as demonstrated in the modern era by the likes of Ricky Hatton with his Manchester City connections.

Although still a work in progress, Langford is starting to reap the benefits of tapping into the captive market that is a stadium full of fellow fans.

“Yeah, for this fight in particular I think it will really pay off,” he revealed. “I’m starting to create quite big links with the Albion, it was a slow burner to start with but now it is starting to grow more and more. They are putting me in the programme, which I am really grateful for and hopefully they will get me on the pitch before this one.

“I also play a little bit of football for the Albion supporters side – Boing FC – and the guy who runs that, Dave Challinor, has really taken me under his wing in terms of the Baggies side of things and is pushing me really hard to everybody. I’m getting a good response and I’m hoping to get a lot of Baggies fans to the show. I don’t know how well that will go down in Wolves, but you’ve got to do it!”

Langford’s connection to West Brom comes from his Dudley-born dad’s side of the family who still reside in the area. During his upbringing, family visits from Devon to the fatherland were made in conjunction with the home fixture list.

His return to the region in adulthood was something of a labour of love. During a camp with the GB junior squad, Langford was afforded the opportunity to spar with the seniors and there was one in particular who the attack-minded youngster couldn’t lay a glove on.

The elusive character in question was one Frankie Gavin, which prompted Langford to seek out his trainer Tom Chaney for some similar defensive tuition. Geography then came into play when selecting Birmingham University to undertake his sports science degree – proximity to Chaney’s Hall Green gym and the Hawthorns. A near-perfect fit.

“I’ve always been a West Brom fan because of my dad and we used to come up regularly when I was a kid to see family and tie it in with the Albion,” he fondly recalled.

“The Birmingham University thing came about because I really wanted to get to Hall Green to train with Tom Chaney. I got my qualification and Birmingham was also perfect because I could get to the games, as well as do all the training I needed to do.

“I did some sparring with Frankie while he was preparing for the Commonwealth Games with the England squad juniors – he was the one I couldn’t hit, I just couldn’t hit Frankie.

“I’ve always been offensively minded and always been able to land punches on people, so when I came up against someone I couldn’t hit I thought I needed to learn some defensive stuff as well.

“I made a connection with Tom, got his number, and came up over the next couple of years to do some sparring and got to know Tom and the gym. As soon as I got the chance to go on to Uni I picked there because it fitted perfectly. He’s the best coach I’ve ever had so I’m not going to go anywhere else.”

The more defensive-style strategy probably served Langford well in his early fights as he put rounds in the bank, with just one of his first eight wins coming inside the distance. With more experience came more early nights and three of his last four opponents have been snuffed out with rounds to spare.

“With every fight I am making little improvements and constantly working hard in the gym doing new things,” he reflected. It is showing in my performances and it never really used to be my strength that you would be wary of. Now I’m finding more and more that it is coming and I’ve got another string to my bow.

“As well as the boxing, footwork and things that I brought over from the amateurs, I’ve now developed that as well and it’s becoming a real attribute.

“With me, if you look at my early fights they were against tough British journeymen that are in there to survive. Obviously it’s important to get those early learning fights out of the way, but I need someone to throw back at me and leave the openings that I can capitalise on. I wouldn’t say I am becoming powerful, there are certain shots that I throw well and I know I deliver a good body shot.

“I’m never going to be the most powerful fighter but it is more that I now have the confidence to hold my feet a bit more and the timing is coming. The timing along with the speed stuns them to start with and then when you put an onslaught together, they are going to go.” 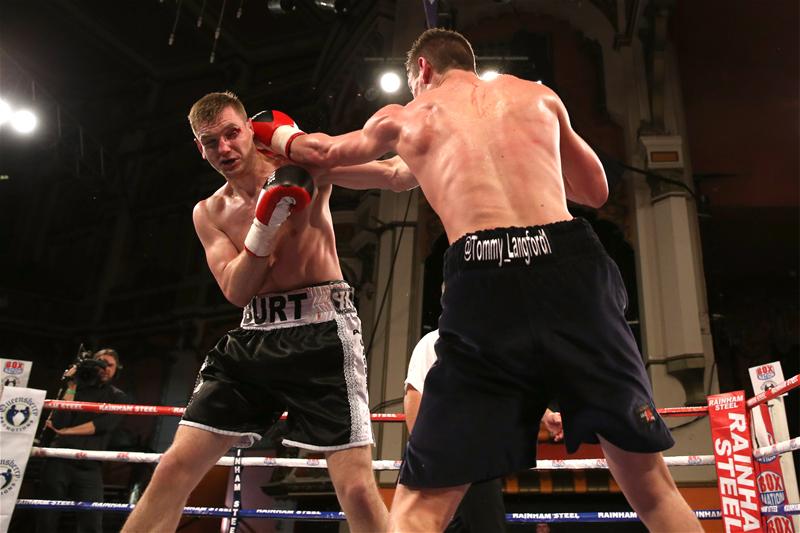 While Langford’s October opponent yet to be confirmed – he has asked for one with a higher ranking than himself – preparations continue nonetheless and another of his academic qualifications comes into play, one that probably knocks a tidy few quid off his training expenses.

Aside from his sports science degree, the unbeaten middleweight is also a qualified nutritionist, making redundant the need to employ a professional calorie-counter during pre-fight camp.

“Yes 100 per cent!” he chuckled over his cash-saving initiative, although adding that weight is often simply determined by how much you put inside you. “More than anything when it comes to dieting for boxing, unless you really have to crunch down on it, it is really just about eating the right things and eating clean.

“You train that hard and that often, so if you are over the weight you are doing something wrong – you really are eating way too much. I’ve tried and tested things with me and know what doesn’t work. I’ve spoken with different nutritionists, including Kerry Kayes, and his advice combined with my knowledge has worked best for me.

“When I’ve spoken to other people who are just out-and-out nutritionists, they don’t understand the demands of the boxing trade and it doesn’t seem to work for me. You have got to really believe in what someone tells you and try it. If it works, stick to it – and that is what I’ve done for my last few camps and it’s going well for me.”

Langford is a veteran of 106 amateur contests which yielded 86 victories ahead of turning professional at the age of 23. His long stretch in a vest was down in no small part to the tantalising prospect of competing in the London 2012 Olympic Games.

“Yes I did have my heart set on it and was really going to try and go for it. I felt I should have been given a bit more of an opportunity on the GB side of things, I never really got the call up that I wanted for that.

“I obviously boxed for England, but was always getting called up at late notice and never really felt I was given a fair crack of the whip. There were people on the squads who hadn’t won ABAs and who I had boxed and beaten or done well against.

“I was trying to push for that but as soon as I knew it wasn’t on the cards I sat down with Tom and worked through turning pro.”

Missing out on a summer in the Stratford sun has meant Langford playing a longer game, without the recognition and headstart such a platform affords Olympians who join the paid ranks.

“Without a doubt the profile is huge that they can turn over with, it is on the BBC for one. That publicity helps them and you can push on to bigger things quicker.

“If I’d had an Olympics behind me people would be talking about me fighting Billy-Joe Saunders in one of my next few fights, like they are talking about Luke Campbell fighting for world titles.

“That is tough but, at the same time, it means I’ve had to really work hard and prove my worth in the pros with the small hall route, attract a promoter and take my opportunity with both hands, which I have done.”

Doing it tough will make it all the sweeter for Langford if he gets to realise one of his big goals – fighting for a world title on the hallowed turf of his home-from-home that is the Hawthorns.

“It would be massive. The big stadium fights are the ones that boxers want to be part of. The reality is that I need to build my reputation, my publicity and obviously my ranking to get up to those sort of fights. I’m ranked reasonably high by the WBO and, if I really pursue that, with building myself right you could fill a stadium like the Hawthorns.

“It would be fantastic, when you talk about football stadiums for boxing, it is about the right sort of size with 30,000 people not so far away from the pitch. That is a dream and I’ve got to try and make it come true now.”

It really would be a home game for Langford – not to mention Baggie Bird!