How’s this for a spot of name-dropping? Forty five years ago this week I was in the gents at Madison Square Garden having a pee when a man in a trilby standing next to me next to me turned his head and nodded: ”Howya doing pal?”

The stranger in the night had a familiar face. It was Frank Sinatra.

“Fine thanks Frank,” I gulped.

“Who d’ya fancy,” he enquired. 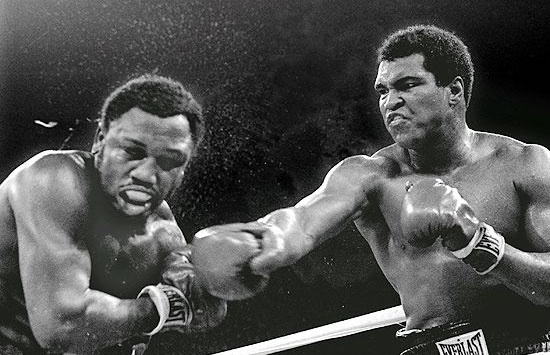 End of conversation. We returned to the press seats – Sinatra was accredited as a photographer for Life Magazine and I was a humble young scribbler covering the Fight of a Lifetime: Muhammad Ali v Joe Frazier 1, for the then richest-ever heavyweight championship of the world.

Sinatra was right about the result. The old warbler actually detested Ali because of his stand over Vietnam and also perhaps because here was someone at least as big as him in terms of global recognition.

But Ali, though well beaten by Frazier, was far from destroyed, as his career subsequent demonstrated. He was floored, outfought and his jaw was shattered. But both he and Smokin’ Joe lived to fight another day – and how!

New York, New York…that was some night. The Fight of a Lifetime was The Thrill of a Lifetime for a youngster like me chronicling one of the most momentous happenings in the annals of sport.

The report I telexed back my newspaper immediately after the fight began: “A legend has been licked. The man who mesmerised the world with his mouthy magic is no longer The Greatest…”

I remember, too, how we all sat at ringside with blue and red Ali v Frazier baseball caps plonked firmly on heads on the instruction of the wonderfully laconic Garden PR John X F Condon.

Some of the more venerable members of my trade had protested that it was undignified but in days when PC meant police constable and not political correctness Condon had warned: ”Well guys, its like this. There are18,000 people in here and another 5,000 outside fighting to get in, mainly blacks and Hispanics. When it all goes off at ringside the cops will want to know which heads to hit, and which not to hit!”

Both Ali and Fraazier received 2.5 million dollars, the largest single payday for any entertainer or athlete at the time. In today’s money that would be worth twenty times or more that figure.

It was an epic ecounter which transfixed the world.

By the evening of the fight Madison Square Garden had a circus-like atmosphere, with scores of police to control the crowd, outrageously dressed fans, and countless celebrities, from Norman Mailer , Woody Allen and Diana Ross to my urinal companion, Ole Blue Eyes. Burt Lancaster served as a colour commentator for the closed circuit broadcast.

The fight itself exceeded even its promotional hype. Ali dominated the first three rounds, peppering the shorter Frazier with rapier-like jabs that raised welts on the champion’s face. Frazier began to dominate in the fourth catching Ali with several of his brutal left hooks and pinning him against the ropes to deliver tremendous body blows.

I scored it about even until round 11, when Frazier caught Ali, backed into a corner, with a crushing left hook that almost floored him, sending him falling into the ropes.

Ali managed to survive the round and fought back over the couple of rounds. At the end of round 14, Frazier held a lead on the scorecards of referee Arthur Mercante and two ringside judghes.

Early in the final round, Frazier landed a spectacular left hook that put Ali on his back (for only the third time in his career). His right jaw swollen grotesquely, Ali got up and managed to stay on his feet for the rest of the round despite several terrific shots from Frazier.

A few minutes later, the arbiters made it official: Frazier had retained the title with a unanimous decision, dealing Ali his first professional defeat, nine rounds to five on the cards of Mercante and one ringside judge and 11-4 on the other.

Those three and a half year he had spent in exile, with only two warm-up fights, finally caught up with Ali. But Frazier had been ruthless in his pursuit of the revenge he had sought for the ‘Uncle Tom’ bad-mouthing and ticket-selling taunting he had endured from Ali in the build-up.Hen was a worthy victor.

They were to fight twice more, with Ali winning both times, most significantly the 1975 Thrilla in Manila , a war which outstripped even the the initial Garden clash in its savagery..

Inevitably I was reminded that night exactly 45 years ago last Monday as I walked around the exhibition of of Ali’s life and times now showing in The Bowl at London’s O2 until next August. It is well worth a visit. 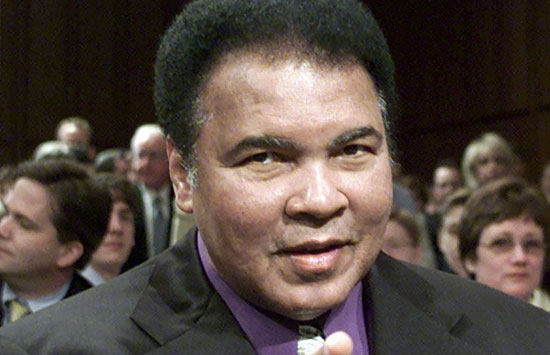 It has been assembled with a great deal of professional thought, care and affection, and as someone pointed out, thankfully as more of a shrine than a mausoleum.

One of the more understated points of interest in I Am the Greatest, as the exhibition is labelled, is the collection of Sports Illustrated magazine covers from his career. “Cassius invades Britain,” warns one from 1963, over an image of the then Clay casting his menacing shadow over Big Ben before he first fought Henry Cooper.

It was the start of a love affair between the world’s supreme sporting icon and this nation which endures to this day.

Among the myriad of memorabilia you will see the glove that Angelo Dundee allegedly split further to gain more recovery time after that fourth round knock-down by Cooper at Wembley Stadium.

But the age-old belief that this delayed the fight by up to a minute is a myth. The interval lasted only an extra five seconds while the glove was examined, and it was never replaced. But a phial of smellihg salts was snapped under Ali’s nose, which was strictly against the rules.

The exhibition reveals just about every aspect of Ali’s life in the ring and out.

It shows the stories behind his refusal to join the American military, and subsequent struggle to be accepted back into the boxing world. Also, his religious conversion and his incredible interactions with some of the world’s most powerful and influential leaders.

And Ali himself has included this inmitable message:

‘I would like to be remembered as a man who won the heavyweight title three times.

Who was humorous and who treated everyone right.

As a man who never looked down on those who looked up to him.

And who helped as many people as he could.

As a man who stood up for his beliefs no matter what.

As a man who tried to unite all humankind through faith and love.

And if all that’s too much then I guess I’d settle for being remembered only as a great boxer who became a leader and a champion of his people.

And I wouldn’t even mind if folks forgot how pretty I was.

Be cool and look out for the ladies!’

What’s more, Mr Sinatra, he did it His Way.