Derby’s Ovill McKenzie adds the WBA Continental Cruiserweight title to his British and Commonwealth titles with a second round stoppage of Finland’s Janne Forsman.  Big-hitting McKenzie dropped Forsman in the first with a hard right hook to the body, but was up at eight and survived to the end of the round.  In the second round two clubbing hooks from McKenzie dropped Forsman, although up at eight, the referee Terry O’Connor waved it off.

ELIMINATOR FOR THE BRITISH LIGHT-MIDDLEWEIGHT CHAMPIONSHIP

Gary Corcoran earns a shot at the British Light-Middleweight title with a gruelling unanimous points decision over Bolton’s Rick Godding.  Corcoran kept the pressure on Godding from the opening bell, constantly applying pressure and looking to wear his man down.  A clash of heads in the second opened up a cut above Corcoran’s left eye in the second round.  In the fifth Corcoran was stunned with a right hand that left him stumbling, but he came through and pressured Godding until the end to come away the winner on points.

Dereck Del Boy Chisora marked his return to the heavyweight scene with a big right hand to flatten Georgian Beqa Lobjanidze in 29 seconds of the first round.  Chisora was having his first fight since losing to Tyson Fury last November and with a new training team in his corner, Chisora came out to prove that he still has one more world title shot in him. 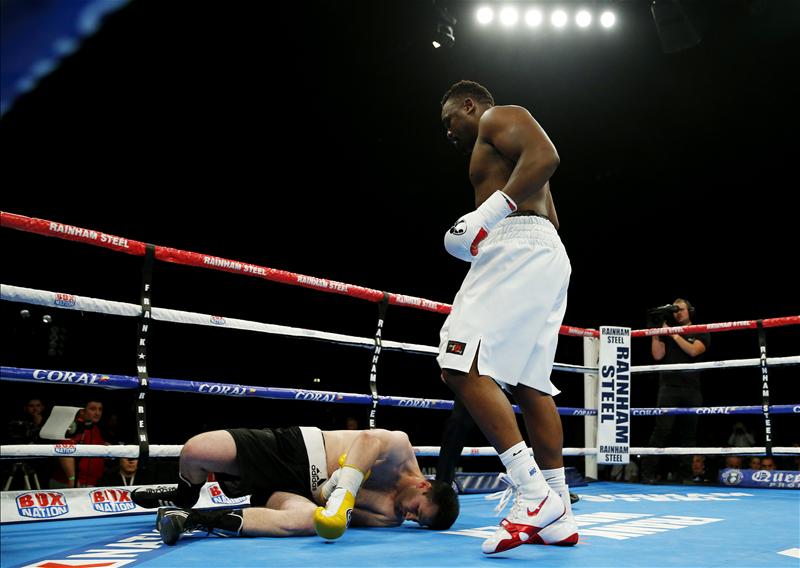 Sharp-shooting Lewis Pettitt halts Antonio Horvatic in the seventh round catching the Croatian on the ropes with a barrage of shots with the referee halting the action.  The Erith ace takes his record to 17-1-0 with seven KO’s.

The hard-hitting southpaw was fast and accurate as he took apart Bloyer to warm up for his date with Lee on Saturday 19th September at Thomond Park, Limerick in the first all-Traveller world title fight.

Saunders was having his first fight since his victory over rival Chris Eubank Jnr last November and needed to get in some ring action before heading into the big fight against Irish star Lee.

The Hatfield ace dropped Bloyer with a big right uppercut towards the end of the third round with the bell saving him, but in the the fourth a hard right dropped Bloyer and despite rising, the referee waved it off.

Straight afterwards Saunders said, “I was out of the ring for eight months so Bloyer was there to give me a run out and shake off any ring rust.  I did the job in five, taking my time and then taking him out when I was good and ready.”

“I’ll be a totally different animal on September 19th in Limerick, just you wait and see,”

“I’m back in the gym tomorrow (Saturday) and then we’re off to Marbella to begin some serious, hard, training and that’s when the blood, sweat and tears begin,”

“With the fight against Eubank, I got messed about by him, always wandering if he was going to pull out or not, but I’ve got no worries about that with Lee, he’s like me, a real fighting man and when we say we fight, we fight,”

“I respect Lee, he’s the world champion and he’s done it the hard way, but this fight is about me and I’ll be there to smash him up and take the title,”

“A good boxer will always beat a brawler and I’m the better boxer in the fight and he’ll be relying on his punch, but it won’t work for him.” 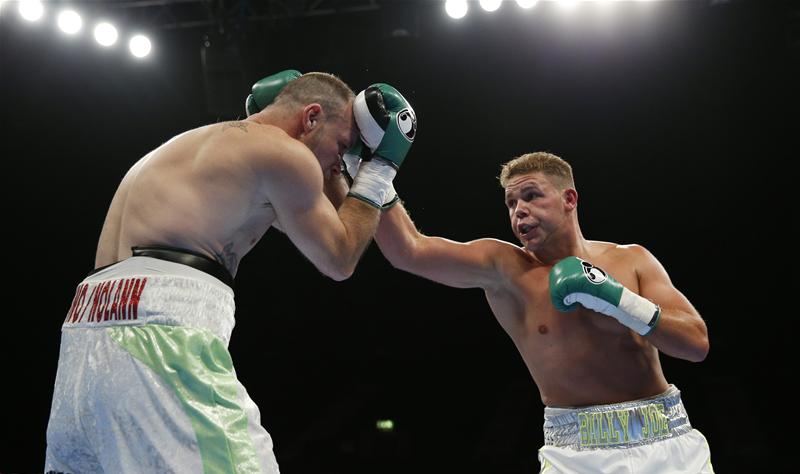 Hard filipino Dennis Tubieron took Josh Warrington the twelve round distance in his last fight, but he couldn’t cope with dynamite punching Mitchell Smith who demolished him inside a round with one punch at the SSE Arena, Wembley.

The unbeaten Harrow Weald ace landed a blockbuster right hand to southpaw Tubieron ribs and he fell on the spot with referee Steve Gray starting the count.  Unable to rise and in severe pain from a suspected broken rib, Gray counted Tubieron out as Smith celebrated in front of his loyal fans.

Smith, 22, made the first successful defence of the WBO Intercontinental Super-Featherweight title and took his record to 13-0 and 7 KO’s – his third back to back stoppage in a row.

“I stepped up my game for this fight and the results showed,” Said Smith.

“I would have been disappointed if I hadn’t taken out Tubieron, but I never expected to do it that quick, I saw the opening and I just went for it,”

“Tubieron went the distance with Warrington and you’ve just seen what I’ve done to him.  I’m not making any boasts but I’m confident in what I’d do to Warrington if we met,”

“I’ve got a fantastic team around me with my promoter Frank Warren, Jason, Richard and now Kerry Kayes and it’s a winning team,”

“I made a big statement tonight and there’s more to come.” 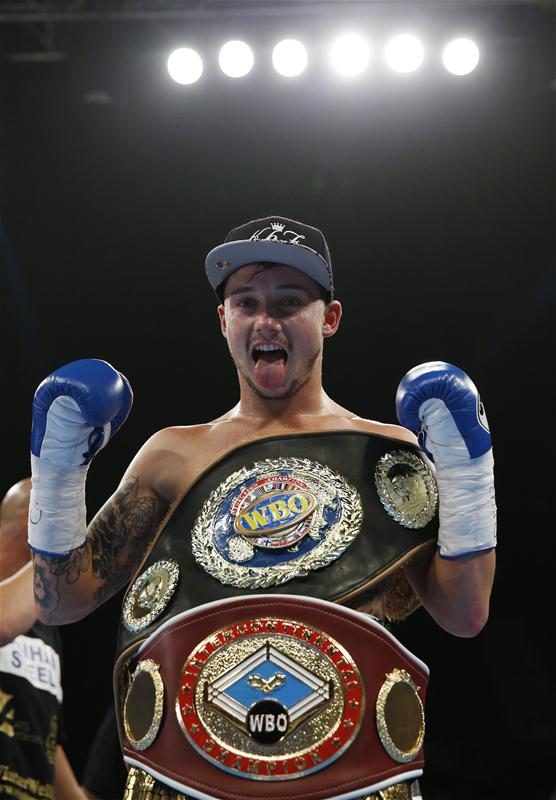 Buglioni got over the disappointment of not facing WBA World Super-Middleweight Champion Fedor Chudinov by demolishing Mexican Fernando Castaneda in five rounds at the SSE Arena, Wembley.

Buglioni, trained by Paschal and Steve Collins, won the Vacant WBA International title and now looks to challenge Chudinov for the title at this venue on Saturday 26th September.

He said, “I felt fantastic going into the fight, obviously I had the disappointment of the world title fight falling through, but I had to remain professional and do my best on Castaneda,”

“My performances are going to be like that from now on, spiteful,”

“It was strictly business for me and I wanted to do some damage,”

“I can’t wait to get to Chudinov next and win that world title.” 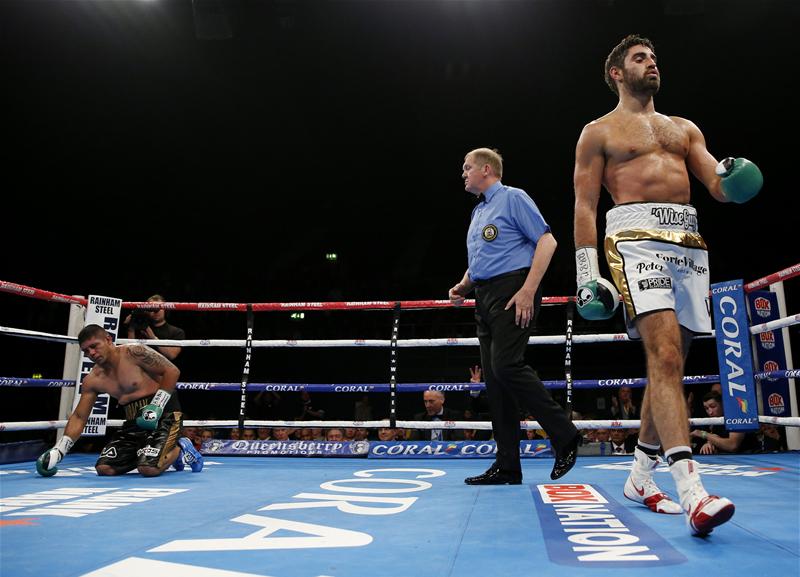 Chingford prospect Boy Jones Jnr. got a highly contentious draw in his last fight, but put that behind him as he dismantled Janis Puksins in two rounds.  All-action Jones ripped in hard shots to the head and body as continually pressured the Latvian until he got the stoppage.

Swindon southpaw Jamie Cox smashed Blas Miguel Martinez inside a round with a powerful performance to capture the Vacant WBO European Super-Middleweight title.  Former Commonwealth Light-Middleweight Champion Cox made his return to the ring in February as a super-middleweight and stopped Alistair Warren in a round and replicated that against Martinez.  Now with a championship title at 168lbs, Cox looks like a serious threat in the talent packed division.