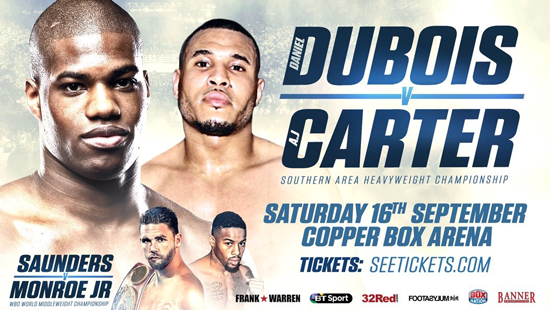 The bookies might have him cast as the latest sacrificial lamb sent to be slaughtered by teenage heavyweight terror Daniel Dubois but Brixton bad boy AJ Carter enters Saturday’s 10 round shoot out for the vacant Southern Area heavyweight title at the Copper Box Arena with a substantial edge in both age and experience, writes Glynn Evans.

“Clearly Dubois and his team have a plan to knock us over and roll on. AJ’s already been knocked out twice, caught off guard before he learned to anticipate shots. Team Dubois will not be expecting this to go past two rounds. They’ve probably planned Daniel’s first defence already. But we have a different plan.

I’ve been coaching Alex (AJ) since he got kayoed in his seventh fight three years ago. To be honest, back then his attitude and application were both lacking and his technique was pretty poor. He required a lot of work but he learned quickly.

Then, in his first start with me, he got disqualified in the first round for hitting Larry Olubamiwo after ‘Break’ was called. After looking decent in his next two fights, he hurt his shoulder, basically because his punch technique was all wrong.

He required surgery and, due to the absence, lost his way a bit; caught up in ‘fighting’ on social media rather than concentrating on improving at the gym. In his return fight last April, he went left hook crazy and was knocked out, albeit by a very tough guy (Poland’s Kamil Sokolowski).

When his manager Brian Lawrence offered the Dubois fight, Alex accepted straight away. I warned him: ‘If you’re just doing it for the money, look elsewhere for a trainer.’ But he assured me he’s up for it and I have to say he’s been properly focussed, training very hard and he’s finally started listening.
I’ve been aware of Daniel Dubois since he was about 16. He used to hang around Miguel’s gym (in Brixton). He was always huge for his age and today he’s a real big guy.

Technically, Dubois is still very raw. His punches are a bit wide and don’t seem very snappy. Obviously he’s powerful but he’s not a beast from another planet. We’ve heard all the stories of what Daniel’s supposed to have done in sparring but we’re not impressed. Sparring should be for learning.

Look, I’ve no doubt that there’s a good fighter in there but he’s untested. Daniel only had a handful of senior amateur fights and he’s never been past round two. His entire pro career doesn’t extend beyond ten minutes!

While Daniel is still a kid, Alex is a grown man who’s used to fighting grown men. We’ve a big edge in experience. AJ is also very quick and athletic. He’s punching well now; fast and hard. He has all the physical attributes to give Dubois a rough time.

Also, Carter’s got me. This is a high pressure fight. Alex knows everyone expects him to get flattened. I can help him manage his fear and relax. He’s aware this is a big, big opportunity for him.
My main thing here is a Carter victory and I don’t care how. This is the first time he’s applied himself properly. The fight’s made for 10 rounds but, either way, there’s no way it lasts that long.  If Alex represents himself to the best of his ability, there’s no reason why he shouldn’t win this.

He just needs to do his thing. Six of his eight wins were by stoppage BEFORE he was shown how to punch correctly. When he’s flowing Alex can really hit. This is the serious business of heavyweight boxing and with those little 10oz gloves on, anything can happen!”