At the second time of asking, with a UK visa firmly affixed in his passport, Guillermo Rigondeaux will land in Britain in July with the mission of taking on Liverpool’s Jazza Dickens with the WBA world super bantamweight title at stake. 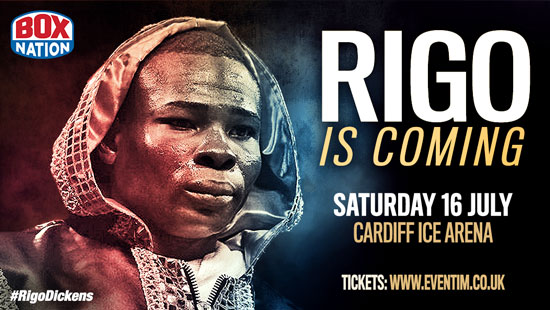 It is match we are thrilled to have made for Jazza, who suffered the disappointment of his March date with the Cuban falling through. He was philosophical at the time, reiterating his belief that everything happens for a reason and perhaps he was right.

Had the fight gone ahead at the Liverpool Echo Arena, only pride and prestige would’ve been at stake, this time there is a WBA Super belt on the line and, although the odds will be stacked against him on the betting slips, Jazza does not see himself playing second fiddle to one of boxing’s modern greats.

This showcase contest will co-headline on our Cardiff card at the Ice Arena on July 16 in what will be our first promotion at the new venue. It would be fair to say we are making quite an entrance, with the other main attraction being the cracking prospect of Liam Williams defending his British and Commonwealth titles against fellow unbeaten super welterweight Gary Corcoran.

It really is shaping up to be some night.

Rigondeaux (16-0) is an avoided fighter and the likes of Carl Frampton and Scott Quigg have always elected to give him a wide berth. The logic, we are often told, is that he doesn’t generate the revenues to compensate for the risk involved.

It must be frustrating for the double Olympic gold medallist to hear the excuses trotted out, to effectively be told you are too good for your own good. Jazza, one of the most popular and likeable young fighters in the business, was more than happy to step up to the plate and I sincerely hope he reaps his rewards on the night.

There is no question that he will be up against it, as any top fighter in the world would be against such a formidable and elusive force, but Jazza and his team at the Everton Red Triangle gym are confident of coming up with a solution to the puzzle of taking on Rigondeux.

The Cardiff card is one not to be missed and, if you are not planning to journey up the M4, you can catch the action live and exclusive on BoxNation.

***********
Our York Hall double-header proved a successful exercise last week even though it culminated in disappointment for Enzo Maccarinelli in his challenge for the European title.

Anthony Yarde once again displayed why he will, in time, become the ultimate force in the light heavyweight division with another quick-fire stoppage victory.

People question the matchmaking for Anthony, but they do need to remember the boy has had a total of 19 fights in the ring. To use Rigondeaux as an example, he clocked up approaching 475 bouts as an amateur, which resulted in him being ring-ready when he turned professional. Anthony’s amateur experience amounted to 12 fights so he needs time to learn his trade and there is no rush.

Tom Baker was impressive and did what he had to do to force a fifth round stoppage. He is progressing well and can now contemplate an intriguing defence of his English title against Miles Shinkwin. That will be one to look forward to.

Lucien Reid introduced himself to BoxNation viewers in style with a second round slaying of Trayan Slavev as he strives to make an impression in the super bantamweight division. He came to us to further his career and we will push him along at the right pace and deliver him the opportunities he deserves.

There were other eye-catching performances from the likes of Boy Jones Jnr, who is developing apace, Lyon Woodstock and Archie Sharp, while we witnessed two debuts of high promise from Charlie Driscoll and Ryan Garner, who I recommend keeping tabs on.

I predict big things ahead for our young crop and it makes me think of times over the years I have been in the game and believed the talent pool to be verging on the shallow. Now, suddenly, there are a heap of guys out there who look a bit special and the fans are in for a treat when they begin to realise their full potential.

******
A footnote to bring fans up to speed following the release of the Championship Circular from the board last week. A number of social media posts reported a bid being won for Liam Walsh to defend his British super featherweight title against Martin J Ward – a fight that won’t be happening at this point in time.

We didn’t place a bid for the proposed contest because we have plans in place for Liam to contest a final eliminator for a shot at a world title. He values his British title, but he is genuinely beyond this level now and I am confident he will be adding to Britain’s tally of world titles in the near future.