Ring the bell for 2016, this year than can be even better than the last.

As we ring in the new for 2016 for boxing fans it is more a case of what’s new in the ring? 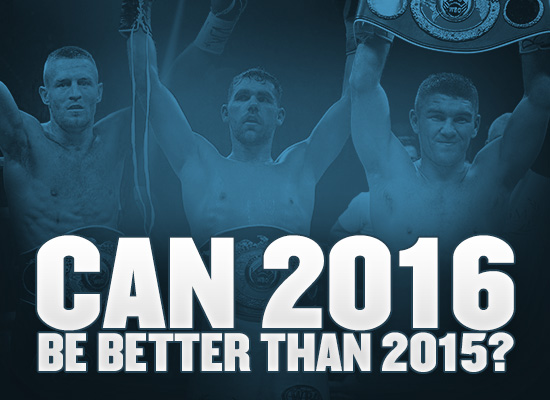 My prediction is a year of exciting contests and even more emerging talent, much it I am proud to say provided by those who fight under the banner of Queensberry Promotions and appear exclusively on BoxNation.

If you think 2015 was a special one for British boxing – and it surely was – then my hope and belief is that 2016 will be even better.

I agree with Boxing Board general secretary Robert Smith that the fight game in the UK is in the middle of a healthy renaissance. There is more activity, he says, than at any time during his 20 years with the governing body, with more boxers and more shows than ever.

There are 60 licensed promoters and just under 1,000 boxers registered with the Board – more than either of us can remember.

The fact is boxing is back in fashion, de rigeur, as Del Boy might say. Socially acceptable and tremendously successful. The po-faced PC brigade have retired with bloody noses.

Everything seems to be clicking at the moment for British fighters with that amazing tally of a dozen world champions – that’s two more than the United States, four more than Japan and five more than Mexico.

Ok, the naysayers may argue that that the proliferation of world champions, with four major sanctioning bodies and 17 weight divisions, devalues the titles.

But there have been four governing bodies in operation since the nineties yet not since 2007 has Britain had more than a fistful of boxers holding world titles at the same time – and then there were just six.

The current ‘explosion’ has happened through careful nurturing of talent – at least as far as we are concerned – and bringing on boxers gradually, taking the opportunities as they arise. It is also about shrewd matchmaking.

Perhaps the key to all this is that there is now so much more boxing on TV. I will blow my own trumpet here and say that the advent and development of BoxNation has been a catalyst.

Sky were on the brink of withdrawing from boxing, then we came along and suddenly they were back in the game. They have done a great job but people, tell me that BoxNation’s live presentation and traditional approach to coverage of the sport is superior.

Actually this could be a win-some-lose-some year for British boxing as it is unlikely all 12 world champions will hang on to their titles. But the upside is that there is brilliant, fresh young talent ready to take their place. 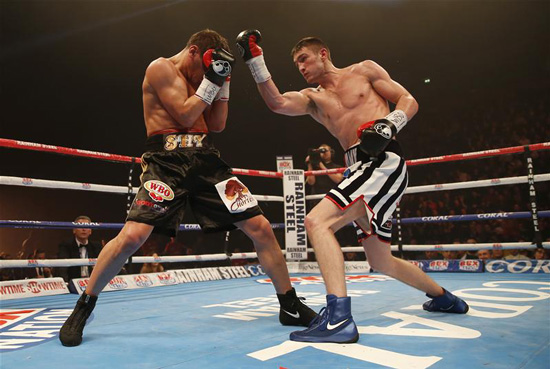 I expect our trio of current world champs, Terry Flanagan, Liam Smith and Billy Joe Saunders to march on to bigger and even better things, though of course Manchester’s ‘Turbo’ Terry, who I feel is unquestionably the best lightweight in the land and the opinion of those who know the game, first has to stave off the home-town challenge of the redoubtable Derry Mathews in Liverpool on Saturday February 13. Mathews has a big punch to turn things around and I’m sure he’s going to rise to another level in front of his home fans.

This WBO title fight, truly a fistic Tale of Two Cities, live on BoxNation, heads a cracking bill which also features a gloved galaxy, including Ellesmere Port’s Paul Butler, who makes the first defence of his WBO European super-flyweight title that he won with a stunning sixth round stoppage of Silvio Olteanu last month.

The 27-year-old former IBF world bantamweight champion is on course for a second world title shot in the 115lb division in 2016 with three knockout wins since his loss to Zolani Tete, the South African sensation who is the latest addition to the Queensberry stable.

Unbeaten big- punching Welshman Liam Williams is back in action after his two-round demolition of Kris Carslaw, never before stopped in his eight-year career, to defend his British and Commonwealth super-welterweight titles.

After a year out following hand-surgery, Williams showed that he’s punching harder than ever.

One thing I am hoping to see in 2016 is the much-desired unification of some of those world belts. Carl Frampton and Scott Quigg is already set for February and if he wins his contracted return with Wladimir Klitschko it would be good to see Tyson Fury and WBC champion Deontay Wilder get it on this summer.

Other natural clashes are between Billy Joe Saunders and either Gennady Golovkin or Canelo Alvarez – otherwise a re-match with Chris Eubank jnr would fill a football stadium; similarly Liam Smith against Miguel Cotto and the winner of Flanagan and Mathews with Anthony Crolla.

And, of course, Amir Khan against Kell Brook now that his hoped-for date with Manny Pacquiao seems to have finally bit the dust, with the picky Pacman now set to meet Timothy Bradley for the third time, the Filipino’s promoter Bob Arum saying it is a ‘done deal.’

I feel sorry for Amir. Once again he has missed out on a biggie as well as being snubbed in the New Year Honours despite being such a fabulous ambassador for boxing.

Congratulations to Carl Frampton on his MBE, but why only him in such a productive year for the sport?

If the Brook fight proves difficult to make – as it might – I’m happy to offer Amir a decent pay-day for another potentially tasty domestic scrap, with, say either Liam Smith or Bradley Skeete.

In some ways 2015 has been an appetiser for more fistic feasts to come this year. So stand by your sets, or roll up for the shows.

Wishing you a Happy and Peaceful New Year from all at Queensberry Promotions and BoxNation, and as always thanks for your support.

*On Monday: The Big Interview with Lewis Pettit.