High Wycombe hotshot Ben Smith starts his 2016-17 campaign at Harrow Leisure Centre this weekend confident that it will conclude with him on the cusp of minor title contention. 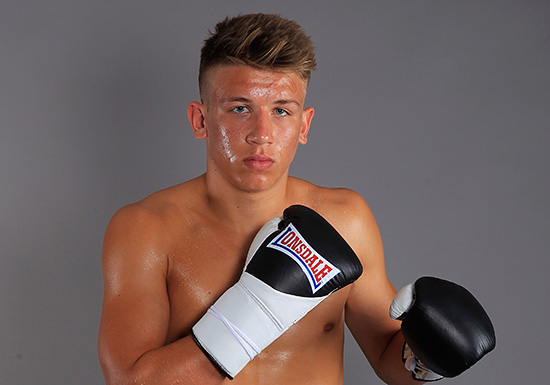 You’re causing quite a commotion up in Buckinghamshire!

Just a bit. Though West Ham is my Premier team, I’ve lately attached myself to Wycombe Wanderers and started knocking around with several of the players. My sponsors pay for a huge billboard at Adams Park and I’ve been invited on to the pitch before fights. Some players are starting to attend my fights and hopefully, I can build on the Wanderers passionate support as my career progresses.

Thus far, you’ve logged three four round shut outs since debuting as a teenager a year ago. How do you assess your progress?

I’ve delivered controlled performances against three very established British journeymen and I’ve taken something different from each one. On my debut, Kristian Laight surprised me with his cleverness; moving backwards, frustrating me. Dan Carr gave me a ridiculously tough scrap while the Fonz Alexander fight was on a huge bill at the Copper Box.

In what ways have you developed away from the public eye, under the guise of coach Mark Tibbs at the West Ham gym?

I don’t have an ‘off season’. I’m constantly in the gym and eat clean all the time. My life is train, eat, sleep, repeat.

My sponsors Core Atlantic pay for me to train full-time and pay for a nutritionist which allows me to do the weight far easier whilst staying very strong.  Over the year, I’ve slowly filled out physically – but there’s plenty more development to come.

I also watch a lot of fights on DVD. Dad used to sponsor Kevin Mitchell and I’ve become huge into (WBA lightweight champion) Jorge Linares since their fight. I study him a lot. We’ve similar styles – at different levels obviously – and I love his flashy combinations. Against Kev, he was losing the fight but never lost his game plan.

It’s been a sombre week for the sport after Dundee’s Mike Towell lost his life in battle last Friday. How does such harrowing news affect the mindset of a bright young prospect such as yourself, who’s embarking on a career in this hardest, most dangerous of sports?

It was very sad – condolences of course to Mike’s family – but it really doesn’t affect my way of thinking. People regularly die in other sports such as skiing yet it’s only boxing that gets a bad name. There’s always a fear factor. Your opponent is coming to hurt you but we have scans every year and the Board and referees look after us. It’s not affected me unduly.

After five and a half months on the sidelines, you return to duty at Harrow on Saturday. What are your hopes for the forthcoming season?

If I come through in style, I’d like to move up to six round fights and, by the end of 2017, I’d like to be fighting eight rounders and be on the cusp of some form of title. But Mark (Tibbs) and Frank (Warren, his promoter) know what they’re doing. Billy Joe Saunders turned pro with them at a similar age so they’ve done this before. It’s up to me to keep winning and improving and they’ll get me up there.

Harrow Leisure Centre – just 25 miles from High Wycombe – is a happy hunting ground as you triumphed there in some style on your debut 12 months ago. Good to be back?

Yeh, good memories. Last time, I was really nervous because I’d sold 270 tickets and there was a huge roar as I walked out. The Harrow venue is very compact and the atmosphere really echoed, even more than at the York Hall.

It’s always nice to be familiar with the surroundings.  This time, I’ve done about 130 tickets but there’s hardly any left. I think it’s almost sold out.

What would represent a successful night for Ben Smith on Saturday?

Hopefully, I’ll get to feature live on BoxNation and attract a few more fans.
Adaway has a losing record but can make things awkward so I don’t want to make silly predictions. I’m punching much harder in the gym and just want to impress, entertain and look good. Honestly, I’ve never felt better.