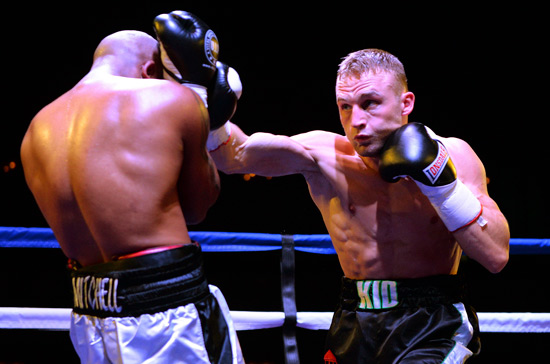 Undefeated Super-Welterweight machine James Metcalf has signed a long-term promotional deal with Frank Warren. The son of Liverpool fight legend Shea Neary has won all 14 of his professional bouts to date and is determined to follow in the footsteps of his father and win a World title of his own.

28-year-old Metcalf, known as ‘Kid Shamrock’, made his professional debut in 2011 and is itching to be thrown into title fights after building his reputation as one of the most exciting rising talents in the 154lb division.

Metcalf’s father, known as the ‘Shamrock Express’, held the WBU Super-Lightweight crown from 1996 to 2000 and was immortalised in celluloid thanks to his appearance in the Hollywood film The Fighter; starring Mark Wahlberg and Christian Bale.

Trained by Georgie Vaughan at Derry Mathews‘ gym in Liverpool, Metcalf is preparing to secure his own legacy.

“My dad was a huge inspiration growing up,” said Metcalf. “Watching him fight made me want to get into professional boxing and win titles of my own. It’s great having someone who has been there and done it giving me advice.

“He’s trained me in the past so that’s probably why a lot of people say our styles are very similar. He trained me for my first couple of pro fights before injuring himself and taking me to Georgie Vaughan who has trained me ever since.”

With a rich batch of Champions and contenders, boxing in Liverpool is booming. Metcalf is aiming to punch his way into the limelight and has big plans for 2017.

“The plan is to get a few wins under my belt and then push towards a title. I haven’t boxed since October so all I need is one or two fights to shake off the ring rust and then I’ll be ready take on anyone. I wouldn’t mind getting my hands on the British title in the next year or so.

Warren stablemates Liam Smith and Liam Williams currently rule the roost in the domestic Super-Welter division. The fierce rivals face-off in at the Manchester Arena on April 8th and Metcalf is predicting a fight of the year barn burner.

“This fight has got the whole country buzzing. All fight fans have wanted to see them get it on for years and now it’s happening it’s impossible to predict a winner.

“Smith is the former World Champion and Williams is the rising star in the division; it has all the ingredients for an explosive clash. I want to be in their position soon.”