SMITH: “HOW ARE YOU SAYING HE’S GOING TO BEAT ME? I’LL SHOW YOU HOW WRONG YOU ARE TO SAY THAT!”

WILLIAMS: “HE’S BY NO MEANS AN ELITE FIGHTER. I NEED TO PROVE MYSELF AND MOVE TO THE NEXT LEVEL” 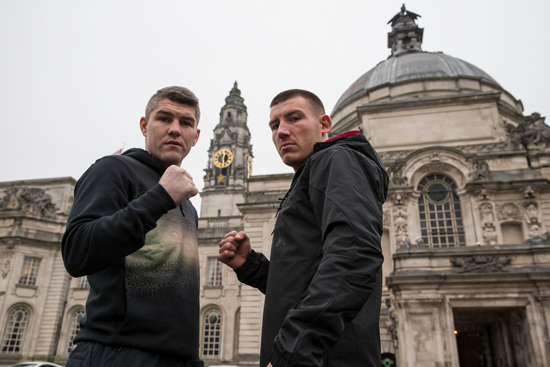 Liam Smith and Liam Williams concluded their two-city media tour today at the Cardiff City hall ahead of their eagerly-anticipated all-British showdown at the Manchester Arena on Saturday 8th April, live on BT Sport and BoxNation.

Liverpool’s Smith, 23-1-1 13 KO’s, was completely unfazed by the boisterous Welsh fight fans in attendance and even said that Williams was ‘lost’ on the top table without his trainer and manager Gary Lockett.

“How are you saying he’s going to beat me?” asked Smith. “I’ll show you how wrong you are to say that. If you think he’ll beat me you’re forgetting things. I was British Champion three years ago and I think people seem to forget that.

“This is a step up for him and I’ll show that it is a step too far. I’m massively confident of beating Liam Williams, he hasn’t got a lot of variety and that will show, especially if it comes down to a slugfest. Liam is lost up here on the top table without Gary.”

Clydach Vale star Williams, 16-0-1 11 KO’s, dismissed claims that Smith is an elite fighter and predicted that his strength and power will be too much for the former WBO World Champion to handle on the night.

“I think I’m physically stronger and bigger that Liam Smith and that will cause him problems all night long”, said Williams. “This fight is a step up for me but Smith is by no means an elite fighter. I need to prove myself and move on to the next level.

“This is the most motivated I’ve been in my career. Everything is going perfectly in my camp and it is definitely going to be a cracking fight for the fans. I’m excited and I know that I can beat him.I think I do things just that little bit better than him and that will show on April 8th.”