Flamboyant lightweight Romeo Casanova Valentino Romaeo says he could give former SAS reservist and world-famous survivalist Bear Grylls a run for his money.

The colourful 20 year-old is following in the footsteps of Chris Eubank and Naseem Hamed as British boxing’s next big entertainer and promises to deliver an explosive performance when he takes on Czech Republic’s Michal Dufek at Dublin’s National Stadium on Saturday 6th February, exclusively live on BoxNation. 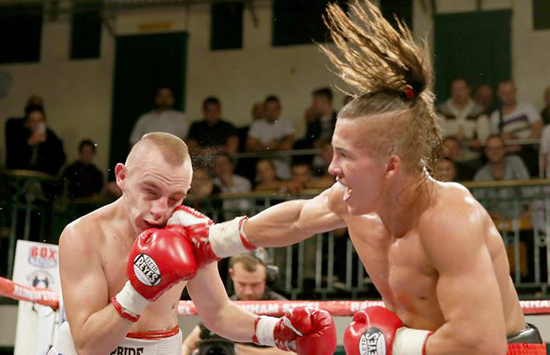 Romeo is anything but ordinary. The Bristol-born muscle man has trained in the wild since he was a boy; climbing trees, chopping logs and digging holes. From an early age Romeo and his father distanced themselves from every day society; choosing instead to focus on training in secluded forests.

“Nobody else in the country trains the way I train. I’m unique in every way and the forest is my gym. I train to keep my mind strong; by training my mind I can push my body to its limit. I have a lot of admiration for the way the SAS train new recruits. They train their soldiers to breaking point and see how far they can push them; by defeating the mind you can overcome anything. Training out in the wild in harsh conditions gives me a mental toughness which my opponents don’t possess” explained Romeo.

In his latest programme ‘Running Wild with Bear Grylls’, the survival expert takes celebrities such as Kate Winslet and Zac Efron on intense two-day trips into the wilderness to see if they have what it takes to survive in extreme conditions. Romeo says he’d jump at the chance to team up with Bear and is confident he could even teach him a few things!

“I’m a massive fan of his programme Born Survivor. I’d love to test myself in some of the most unforgiving environments in the world; I reckon I’d breeze it! My dad would definitely give Bear a run for his money, he’s taught me everything I know and could show him a thing or two that’s for sure.”

The natural strong-man, who defeated Plymouth’s Chris Adaway last time out in a hard-fought points win, is looking forward to fighting in Dublin for the first time in his professional career as he looks to claim his tenth win.

He said: “I have very happy memories of fighting in Ireland during my amateur career. The first time I fought over there I was just 12 or 13 years-old; I remember stopping a boy in the first round. I was 16 the second time and gave an unbeaten lad who had a bit of a reputation his first taste of defeat,”

“Ireland is one of the best places I’ve been to; Dublin especially. The Irish people are always so welcoming and fighting over there is such a pleasure. I don’t have any family in Ireland but every time I go over there it feels like I’m visiting family because I get on with the Irish so much.”

The southpaw has devoted his life to reaching the very top of boxing and says he won’t let anyone or anything stop him from getting his hands on a world title belt. 2016 is looking to be a promising year for the man who thinks entertaining is equally as important as winning.

He said: “I don’t want to waste my time going for the Southern Area title or anything like that. I want to aim for European titles and upwards straight away because that’s just the type of guy I am. I want to become the world champion and nothing is going to stop me achieving my goals,”

“The buzz I get from stepping in the ring on fight night is amazing, especially when I know I’m fighting in front of the BoxNation cameras. I’m an entertainer and it’s my job to get the crowd off their feet. I like to show people my class by mixing things up a bit with my strength and agility.”

Chief support on the card sees exciting Dublin ace Jamie Kavanagh step up to challenge for the first title of his career when he faces Portugal’s Antonio Joao Bento for the Vacant WBO European Lightweight Championship.