Romeo Romaeo: “I’m Going to Convert All My Booers!”

The hard to ignore Bristol-born muscle man looks to extend his unbeaten run to eight and expand his fan club by mesmerising useful Latvian Ivans Levickis.

Boxing writer Glynn Evans caught up with him.

You’ve attracted more than your share of abuse on social media. What misconceptions do these trolls have about you?

Some don’t realise what I do on fight night and in the ring is an act. It’s the same with the hair styles. I want to get noticed, want to stand out. I change it regularly but always keep my pony tail, my trademark!

When people meet me, they always find me quiet and polite, always smiling. But too many voice negative opinions purely on the way I look, without ever approaching me to discover the ‘Real Deal’.

But upset me? Don’t be silly! I laugh it off and wind ‘em up even more…..then block ‘em!

Thank you. I’m always checking my body out in the mirror but I’m not vain. I just like to constantly analyse where I’m lacking, where I can improve.

I enjoy training. It’s never a chore. I’m always adding new drills to my routine to increase my flexibility or hand-eye co-ordination but I never like to give too much away.

I’m very self motivated, set my own goals, challenge myself mentally, when I’m training in the freezing cold, wind and snow. That’s a huge part of what we do.

On Christmas Day, I swam bare top in the Atlantic Ocean whilst up on the Isle of Skye!

Your humble living arrangements don’t reflect your standing as one of the nation’s most touted prospects!

I know. Dad and me still live in a little port-a-cabin at the back of the Peacock Gym and we sleep in the car. It’s hard but it’s what we’re used to. It makes me so hungry to succeed. Besides, it’s nice to wake up right next to the gym.

In my spare time, I like to study. I never went to secondary school but I had a tutor and I passed all my GCSEs. Now I’m learning Chinese and Japanese off the Internet. I also play piano and love to sing. They’ve a studio upstairs at The Peacock.

Hopefully, after I’ve finished my career, I’ll be able to buy properties and live more comfortably. But I’ll always do this to some degree. You can take the kid out the forest but you can never take the forest out of the kid.

You’ve had seven pro fights (three stoppage wins) since joining the profession in November 2013, just three weeks after your 18th birthday. How have you evolved as a fighter during that period?

I don’t do too much different. I’ve more experience and I’m much, much fitter but I’m also more settled and relaxed in my boxing.

I’d like to have more fights – every two months – but other than that I’m very happy with my training and development.

Sparring has been very hard to find. Several trainers call it on but when the time comes, their boy backs out. I’ve been sparring (ex two time British champion) Lenny Daws recently and thought I did really well. I always up my game, rise to the occasion when I spar more experienced guys. I can feel improvements every single day.

For your last gig a fifth round stoppage over Michael ‘Mad Man’ Mooney at the York Hall in March, you weighed a full stone above the super-featherweight division in which you’d previously campaigned. Where does your future lie?

Last fight, up at light-welter, I felt comfortable and took my time. It was nothing to do with over eating, I just had a growth spurt, 5ft 4in up to 5ft 6(in).

But I prefer to bounce around a bit and believe lightweight will suit me even better. I’ll be more mobile and sharper yet doubt I’ll lose any power.

Height is never a concern. I prefer taller opponents. They fall harder! 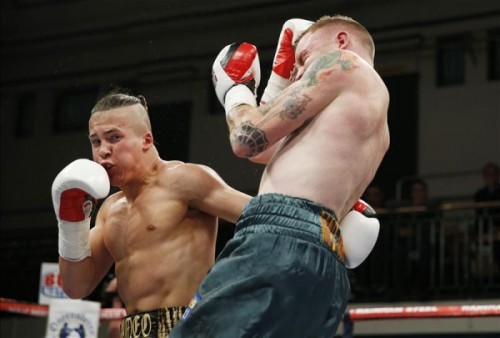 On Friday you finally advance to eight round level against well travelled Latvian Ivans Levickis at the York Hall. Last year he extended Bradley Saunders and Ajose Olusegun to the final bell and 14 of his 19 wins are by stoppage. Could prove tricky?

We hoped for eight (rounds) but I’m ready for 12! I’d like some form of European title fight within a year and a world title fight by the end of the following year.

For some reason there’s a lot who don’t like me at the York Hall. Starting out I got a lot of booing but I’m going to convert them. I definitely had a few cheers last time. I’m not too bothered whether fans come to see me win or lose so long as I’m on their minds. I love attention.

‘Romeo is so misunderstood.

‘For whatever reason, Britain don’t like flash but he’s just a young kid with a lot of dreams that he wants to fulfil and he dances to his own beat. Nothing wrong in that. Gradually you’ll see him lose some of the flash.

‘What makes Romeo exceptional? One word: Ethic. Improvement isn’t about ‘Abracadabra.’ Romeo really dedicates himself.  His dad Tony designed him to be a champion. For his age group, pound-for-pound, Romeo’s at the head of the class.

‘But it’s not just about how hard you work, it’s about how smart you work. He sucks knowledge up like a Hoover. I’m basically known as a defensive trainer. Hopefully, I can blend some of that into Romeo’s naturally aggressive style.

‘He can’t fight for the British title until he’s 21 but he could go for something like the Commonwealth over the next year. Already there’s lots with titles who aren’t as good as this kid.

‘Ideally, I’d like to see him at super-feather. He’s so, so physically strong – that’ll never be an issue –  but who have to consider body structure. That said, Mike Tyson was a short guy for his weight. You can develop techniques.

‘All girls love Romeo, most fans like him and those who don’t, still always watch, hoping he’ll get chinned. He interests everyone.

‘I always say that the biggest room is the room for improvement. But if Romeo continues training, the way he’s now training, he’ll hit the ‘Big Time’. Guaranteed!’