Manchester United striker Wayne Rooney says his club wouldn’t be best pleased if the former amateur boxer was to lace up the gloves again.

The 29-year-old was speaking exclusively to boxing channel BoxNation ahead of his friend and fellow Liverpudlian Liam Smith’s world title showdown next month against John Thompson.

The super-welterweight ace is taking on the American Thompson at the Manchester Arena on October 10th, with England’s all-time leading goalscorer recalling his fighting days and saying the Old Trafford club wouldn’t be too happy if he was to return to the ring.
“My uncle runs a gym in Liverpool I used to go there from the age of 9 until I was 15. It was great, I really enjoyed it, but Everton made me stop and I had to choose between boxing and football but I think I made the right decision,” Rooney told BoxNation.
“I used to go round to different gyms sparring which I really liked. It was quite easy in the end to choose football because that’s what I always wanted to do but I really missed going to the gym because I used to go every Monday, Wednesday and Friday after football.
“It’s difficult to box now so when I get a chance, when I’m coming back from injury or during the summer when I’m off, I always try and do a bit which is great to keep me fit. “I don’t spar – I don’t think United would like that. There was a bit of me on the internet doing some but I try not to do it,” Rooney said.
The Red Devils frontman, who is set to return from injury this weekend as his side pay a visit to Southampton, spent timeout this week recuperating alongside Smith at Amir Khan’s gym in Bolton.
Smith’s brothers were also lending their support to 27-year-old sibling Liam ahead of his title hunt, with Rooney on hand to give his backing and believing he will be the first of the famous four to claim world glory. 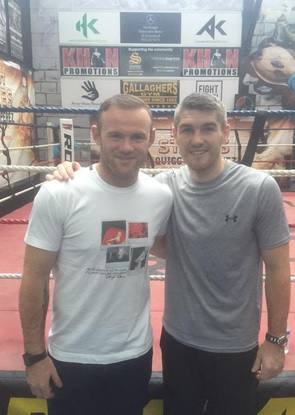 “We’ve seen Paul have world title fights and now Liam, so I’m sure their parents must be very proud,” said Rooney.
“Hopefully Liam can be the first to get that world title. I think John Thompson will be a difficult fight because he’s quite tall and is difficult to hit if you don’t get inside him. It will be tough but we believe that he can do it and bring a world title back to Liverpool.
“[Roy Hodgson] won’t let me take time out of England duty but I’ll certainly be watching it on television and I’m sure Liam will be at his best. I’m really looking forward to it,” said Rooney.
The former Everton man has also revealed who he regards as the best fighter in history, with the recently retired Floyd Mayweather topping his list.
“It’s difficult because you’ve got [Muhammad] Ali, [Mike] Tyson, but I have to say Floyd Mayweather.
“My favourite fighter growing up was always Tyson – I think it’s a shame what happened to him in his personal life and the fights he took at the end of his career but I think Mayweather is a different class.
“It didn’t look like Manny Pacquiao was 100% ready for the fight with Mayweather and we all know how good Ricky Hatton was and he dispatched him incredibly – so those are two standout Mayweather performances for me.
“It will be a shame if he doesn’t box on and get to 50 fights unbeaten. I’m sure with the money he gets for his fights he will box on,” Rooney said.
Tickets for Liam Smith v John Thompson are available from frankwarren.com or watch live on BoxNation (Sky 437/490HD, Virgin 525, TalkTalk 415, online or app) for only £12 a month. Visit boxnation.com.