Liverpool’s European Bantamweight Champion Ryan Farrag can’t wait to return to action on home soil when he boxes in an eight-rounder on the mouth-watering Liverpool Echo Arena show on Saturday 12th March, live and exclusive on BoxNation. 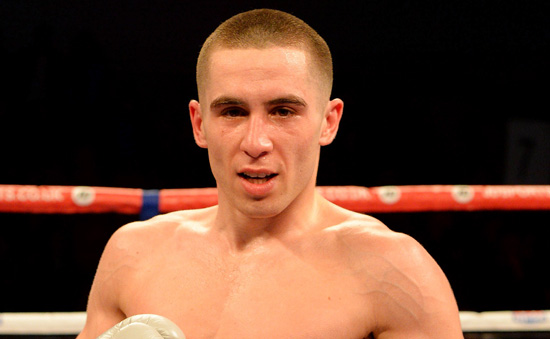 The 27-year-old, who has 14 wins and one loss on his record, beat two-weight world title challenger Stephane Jamoye in his own back yard last time out to claim the vacant European Bantamweight title. Many labelled Ryan as the massive underdog going into the fight but the Scouser upset the bookmakers and showed his class to defeat Jamoye by stoppage in the ninth round.

Farrag hopes his victory in Belgium will encourage more British fighters to test themselves against top foreign talent outside of the UK but understands why many are reluctant to do so.

He said: “Seeing poor decisions from judges and referees definitely makes a lot of British lads think twice about fighting abroad. Sometimes in life you have to take a risk; as they say the bigger the risk the bigger the rewards and I went out there and became the European Champion overnight,”

“I was gutted that it wasn’t televised as it would have been good for British lads to see it’s not impossible to go abroad and get a win. Hopefully a few more British fighters do start to take risks because it can really push your career on.”

A huge all-British world title showdown between Liverpool’s Derry Mathews and WBO World Lightweight Champion Terry Flanagan tops the night’s action and Farrag is backing his fellow Scouser to get the job done.

“I haven’t seen a lot of Flanagan but from what I have seen he looks very tough. He’s young and he’s fresh so I’m sure he’ll give Derry a few problems. Derry is as experienced as they come, he’s been there and done it before so I’m going for a Derry win. He’s going to be boxing in front of his home crowd and that can make a big difference,” said Farrag.

“I boxed at the Echo Arena back in 2012 when I beat Gary Smith on points so I know it’s going to be a cracking atmosphere. Scousers get right behind their fighters and I’m sure there’ll be plenty there showing their support for me.”

Boxing is soaring in Liverpool at the moment with a rich batch of champions and contenders. Farrag is proud that the North West is flying the flag for English boxers and hopes it continues to do so for many years.

“Having such big names encourages young boxers to follow in their footsteps. There are so many good fighters in the city at the moment you have to really push yourself to get recognised; it definitely makes you perform better. You have to work that little bit harder to get to where you want to be because you’re up against a lot of hungry fighters.”

The one and only loss of Farrag’s career came way back in Ocotber 2012 against the current IBF World Bantamweight Champion Lee Haskins, since then Farrag has put his stamp on the division with a solid unbeaten streak of nine fights.

“The win against Jamoye has given me a lot of confidence, knowing that I can go in and do what I’ve set out to do in the ring is important. It’s one thing believing you can do something but it’s another actually going in the ring and doing it. I’d fight anyone in the division; that’s how confident I am.”