Norfolk’s media flocked to the KickStop Gym in Norwich today as stylish Cromer featherweight Ryan Walsh put on a show for the cameras. History maker Walsh was put through his paces by trainer Graham Everett ahead of his maiden title defence against Aberdeen’s unbeaten Darren Traynor this Friday at London’s York Hall, live and exclusive on BoxNation. 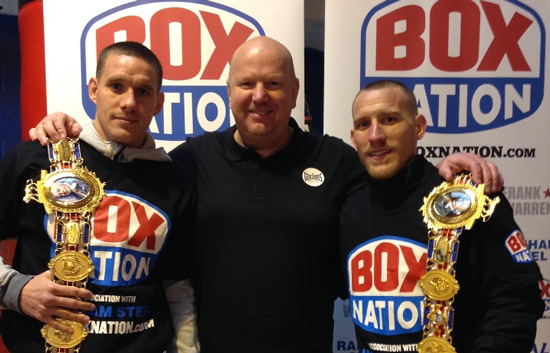 Walsh carved his name into the boxing history records last September when he joined super-featherweight brother Liam as the first set of twins to simultaneously hold British titles. Unbeaten southpaw Liam has enthralled championship rings since winning the Commonwealth title back in 2010 but now it’s Ryan’s name on fight fans lips.

“I’ve been sat behind Liam in his shadow for two years, pushing him and motivating him and vice-versa. He’s been doing brilliant things in boxing, won numerous titles and he’s inspired me. Me and Liam work very hard, his success has always been my success. I couldn’t be the fighter that I am without my brothers and although Michael isn’t as involved as he was but there’s no bigger supporter than him. The success has come from genuine hard work with each other, we push each other to be the best we can be” said Walsh.

“The media attention is something that I’ve got to get used to as it’s quite new to me. Last time there was a lot of interest in myself and Liam because of the record but this time it’s all about me. I do quite like the attention I have to admit, usually I’m away from all this at the training camp so it’s nice to come home to.”

Ryan, now ranked 13th by the WBO, has the honour of kicking off a massive year of boxing on BoxNation as he headlines an action-packed show at Bethnal Green’s York Hall and is relishing fighting in front of the cameras.

He continued: “I just can’t wait. The buzz around this fight has been unreal, we’re doing really well on the tickets and I’m sure the Farmy Army are going to be making a hell of a racket come Friday night. Fighting under the Warren name is huge and I’m a big fan of BoxNation so it’s great to be starting the year off as top of the bill. Being top of the bill adds a bit of pressure but I’m going to be getting a lot of attention which is what I want.”

“I look at the division and it’s a very exciting one. I can’t look past Darren Traynor but after Friday I’ll have a much better idea about what direction I’m heading in. By the end of the year I should have had a good four or five fights. Starting early in January is brilliant because it gives me a chance to be very active this year.”

One downside of fighting so early on in the year is being involved in full training over the festive period but Ryan is confident that his sacrifices will be worth it come fight night. The 29 year-old has spent the past five and a half weeks pounding the mountainside roads of Tenerife as prepares to fight over 12 rounds for only the third time in his career.

He added, “Preparation for this fight has been brilliant. Every camp is slightly different and I’ve taken things from every one that I’ve ever been involved in. My diet and my exercises have all changed, not dramatically though because I think if it’s not broke don’t fix it; all I’m trying to do is improve.”

Remaining tickets are available from Ticket Master at www.ticketmaster.co.uk and 0844 844 0444