SADIQ: CHELLI COULD NEVER OUTBOX ME 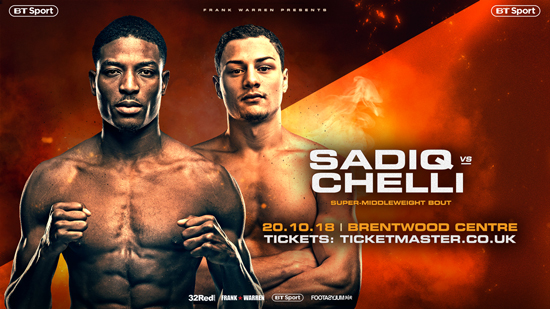 UMAR SADIQ only affords his next opponent, Zak Chelli, a puncher’s chance when the two unbeaten super middleweights come together in what should be a fascinating match-up at the Brentwood Centre next Saturday (October 20).

Sadiq suspects a heavy punch is the only weapon of note in the Chelli armoury and dealing with a puncher is something he is well equipped to withstand.

“He is very explosive and a good challenge but I had 45 amateur fights and 36 of those were at elite level,” reasoned the 30-year-old with three professional fights under his belt.

“So I am used to going in there with guys who are national champions, county champions or champions from other countries – and many of them could whack.

“So the fact that he can whack doesn’t intimidate me, especially because I am sparring cruiserweights and light heavyweights on a regular basis. I also believe I am much better than him.

“Although on paper it looks a 50-50 fight and a dangerous one, in reality I think taking away his power, it is actually just another learning fight for me.”

While each boxer will bring a completely contrasting style of fighting into the ring, live on BT Sport, Sadiq believes the clash could well provide compelling viewing.

“I don’t know, it could be awkward, but they could also gel really well. He is a brawler and I am a boxer-puncher and it can end up gelling well. Archie Sharp and Lyon Woodstock gelled really well last weekend and Archie is a boxer-puncher, while Lyon in that fight was seemingly a brawler.

“Hopefully we will get another great fight for the fans on BT Sport.

“The truth is I rate him as a puncher and that’s where it stops,” added the Ilford man, who goes along with the thought process that Chelli will stalk him with the aim of knocking his block off.

“I believe so. I saw an interview where he was saying he can box long and all that, but he could never ever try to outbox me. That is a fact and he knows that, regardless of who he is trying to fool.

“His only hope is going to try and brawl – and I am ready for that.”