On day one of the Premier League season the footballing favourites of Sam McNess ventured from east to north London and banked a surprise three points with a coupon-busting 2-0 victory over Arsenal. 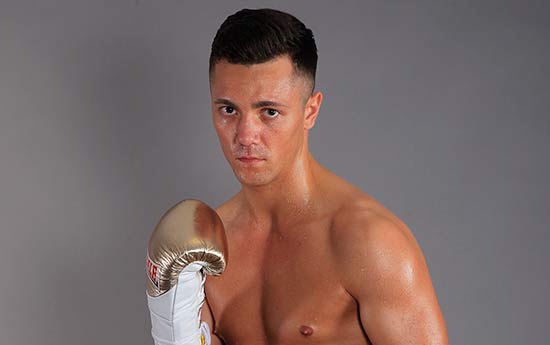 The super welterweight is now seeking to follow in the footsteps of his beloved West Ham when he too crosses the east-north divide in his first outing of the boxing season.

McNess tackles his second professional contest at the Harrow Leisure Centre on October 30 when he takes on Kevin McCauley on the undercard of a bill featuring Jamie Cox defending his WBO European super-middleweight title, as well as his stablemate Tom Baker challenging for the vacant Southern Area light-heavyweight crown against Margate’s Jack Morris.

The die-hard Hammer, who is currently in the process of securing his season ticket for the club’s new beginning in Stratford, which will actually quash a childhood dream of the now 23-year-old.

For now though, McNess would settle for a repeat of his team’s away-day return in the north of the capital.

“Definitely, I’m wearing the West Ham colours as well – I want to wear the colours for my whole professional career,” stated the Romford-based rookie pro. “And I want to do the same as they did on the first day of the season!”

A number of fighters have nailed there claret and blue colours to the mast over the years – including McNess’ sponsor Charlie Magri – and one of the more recent inspired an ambition that he would have to get a serious move on to fulfil.

“Kevin Mitchell fought at Upton Park (vs Michael Katsidis in 1010) and I was at the fight thinking ‘I would love to fight here one day’, that would be my dream.

“Now they are moving into the Stratford ground I don’t think that is going to happen. I am a proper fan and I’m hoping to get my season ticket today so I will be at the Olympic Stadium for every home game.”

So while McNess is most likely to miss the cut when it comes to stepping out at the current home of the Hammers, it was missing out on a trip to Glasgow that cut deepest and prompted a switch to the professional ranks.

He was in pole position for a place in the Commonwealth Games squad in 2014 when a dubious decision went against him at the ABAs and the England vest was handed to the winner of the previous year’s tournament.

“I hoped to get to the Commonwealth Games last year, I was No.1 at my weight and entered the ABAs as first seed,” he reflected. “Then I had a bad decision in the quarter-finals, it ruined my plans and they ended up sending Scott Fitzgerald who won the ABAs the year before and he ended up winning the gold medal.

“The thing is, he lost in the first round in the same year at the ABAs, but they obviously made the right choice because he went on to win gold.”

Perhaps the choice was considered vindicated in the eyes of the selectors in Sheffield, but it understandably still rankled with McNess, who may well have have achieved similar and it proved something of a final straw, bringing down the curtain on an amateur career that spanned some 85 contests.

“Exactly, yes it was and I was really disheartened because I was on the development squad for four years and they were confident in sending me to Kazakhstan to fight the world champion, but wouldn’t put me on the podium squad. It was frustrating, I was going up there every two weeks and was just getting sick of it.

“I think it was bringing my boxing down as well, bringing my confidence down, I felt like I was stuck in a rut so I took a bit of a break and looked into turning professional. I feel much fresher and more positive about everything now.”

His journey towards punching for pay began with a switch from the Essex gym of Tony Sims, where he trained as an amateur, to the West Ham camp of Mark Tibbs.

“I had my last amateur fight in August 2014 and had about a two-month break after that,” he recalled. “I knew I wanted to turn pro and, at the time, I was training with Tony Sims. I was with him for a couple of years but wanted to have a look about before turning pro.

“I then met Mark, I liked what he done and he is a quality trainer with a good background as well, so I decided to go with him. I think it is the best choice I have made,” he reasoned, admitting that his style was a little robotic at the time, requiring a spot of Tibbs tweaking.

“When I first came to Mark I hadn’t been in the gym for a while so I was a bit stiff and everything was out of sync. After spending a bit of time with Mark and listening to what he was telling me, he got me relaxing more with greater variety in my punches. 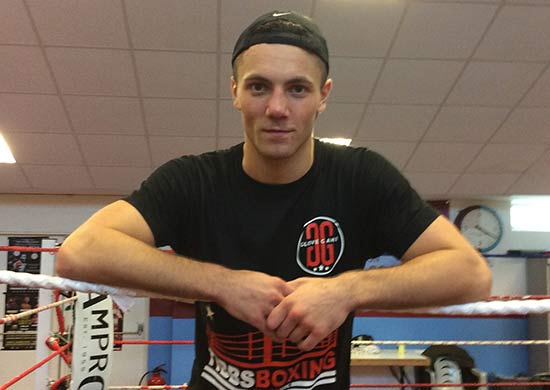 “When I had my debut I felt so confident knowing that I had Mark in my corner, with his dad helping as well, so I knew I was in brilliant hands.”

Not that his debut went without a hitch, with a jab of the needle variety proving more than just a thorn in his side, resulting in his York Hall entry being delayed by a month.

“I was originally meant to be fighting in June, but I had a bit of trouble with my medical. I had a hepatitis B injection then had my bloods withdrawn about two days after – and this was all in the week of my fight. Traces of the injection still showed up in my blood and it looked like I had hepatitis B, so I had to pull out.

“I found out about three days before my debut and I had sold about a hundred tickets, then I found I couldn’t box and had to take all the ticket money back and it was a massive headache. I was a bit down, thinking there might be something wrong with my blood, but people told me it had happened before.

“I had my bloods done again about two weeks later and then got the new date of July 17. It came through all fine and I was good to go.”

His debut demolition of Aaron Robinson in just over a 100 seconds saw him follow in family footsteps, with father Steve a former professional of 19 contests at the same weight.

“Now it is done I am ready to get the ball rolling and start to make a name for myself. Everyone used to say to me that I would be nervous for my debut but, to be honest, I thought I was really relaxed in the dressing room. I think the main reason is that I know I’ve got good people behind me.

“I am ready to move on, take one fight at a time and see where it takes me.”

The next stop is Harrow and an opponent with a few miles on the clock. McCauley is a veteran of 123 fights, so he should know his way around the ring and potentially put some rounds in the bank for the young puncher.

“I’ve watched a few of his fights and he is experienced and durable. He’s only been stopped a few times – and he must fight every week!

“I hope to get rounds, I am going to go in there and try and stop him, but I will see how it comes and get behind my jab. If I catch him clean and know I’ve hurt him then I’ll jump on top of him, but I’ll see what happens.

“I noticed on my debut that I was throwing a lot of combinations and I think it is mainly down to Mark and the pad work we do. When I’m sparring I work behind my jab but when I catch them with a shot he says to let my hands go.”

Letting his hands go – at speed – was a speciality of McNess’ boxing hero, one he admired as much for his ring walks as his his ring craft. He admits that, style-wise, he has little in common with Prince Naseem Hamed, but did once fancy strutting his stuff in a piece of attire Naz would’ve approved of.

“I remember the magic carpet and him fighting at Madison Square Garden and taking about ten minutes just to walk to the ring.

“When I first went to the Repton, my dad took me when I was nine years old, Charlie Magri had his old boxing shop in Bethnal Green and he had an old pair of leopard print shorts in there. I begged my dad to get me them for the gym, but he never did.

Strictly claret and blue these days!