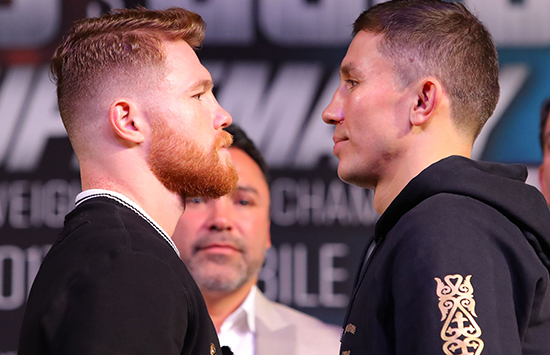 They used to call the heavyweight championship of the world the richest prize in sport. Then along came Floyd Mayweather jnr.

Last month in Las Vegas the Money Man trousered more in ten rounds than Wladimir Klitschko did in ten years – or Muhmamad Ali in his entire career.

Mayweather’s $300million dollars plus pay cheque for his ludicrous mismatch with UFC’s Conor McGregor was at welterweight – but it is the higher division of middleweight where the real boxing riches abound. Not so much in monetary terms but in tradition,talent, unforgettable contests and fistic lore.

Middleweight is the traditional glory division of boxing with legendary figures such as Sugar Ray Robinson, Harry Greb, Carlos Monzon, Jake LaMotta, Tony Zale, Rocky ‘Somebody Up There Likes Me’ Graziano ,Stanley Ketchel, Mickey Walker, Roberto Duran , Thomas Hearns and Marvin Hagler engaging in epic clashes the likes of which have been markedly absent in the division. Until now.

Once again the middleweight division is suddenly bursting with excitement and lick-lipping anticipation. 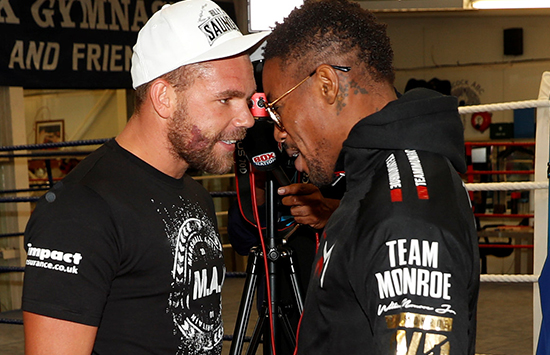 As I said here last week this Saturday once Billy Joe Saunders and Willie Monroe jnr have finished clasping each other to their bosoms after strutting their stuff some time around midnight ,(I take a remotivated BJS to keep his WBO belt in seven) I will be hotfooting it from the Copper Box to The Box in my lounge. There I will be, eager to catch the exclusive BoxNation telecast from Las Vegas of Frank Warren predicts could be the fight of the decade. Maybe the fight of any decade?

‘I believe this could be the most gripping confrontation in the 160lb division since Marvin Hagler and Thomas Hearns fought their brief battle of raw intensity in the same Sin City 32 years ago, though it is likely to last longer’

Golovkin 35, with an 88 per cent ko record, holder of four world titles, puts his unblemished record of 38 bouts on the line against arguably the most outstanding young talent on the planet, scourge of British fighters and last seen sending Amir Khan to dreamland.

I believe this could be the most gripping confrontation in the 160lb division since Marvin Hagler and Thomas Hearns fought their brief battle of raw intensity in the same Sin City 32 years ago, though it is likely to last longer.

There hasn’t been a world middleweight title fight to match it in those three decades since -until now.

Having fancied Golovkin from the moment the momentous match was made I am not about to switch horses.

Canelo maybe the smarter boxer but GGG is the stronger man and heavier puncher. He may take one to give two but I have yet to see him wince.

He reminds me so much of Hagler, my all-time favourite fighter outside Ali.

Most of boxing’s middleweight masters are now celluloid images from a bygone age, but I did see Hagler and Hearns in that war of attrition forever etched in the consciousness.

Hagler came from the same boxing backyard in Brockton, Massachusetts, as Rocky Marciano and for a golden spell in the eighties he, Hearns and Sugar Ray Leonard were boxing’s holy trinity. Toss Roberto Duran into the mix and between them they fought each other nine times.

If there is one fight I could watch over and over again- apart from ‘The Thrilla in Manila’ – it would be Hagler-Hearns.

Their brutal and bloody collision at Caesars Palace on 15 April 1985 lasted a mere eight minutes and one second but it stunned the boxing world with its undiluted savagery.

It is said that the first blistering round was the fiercest ever seen. Ring Magazine called it “the greatest round in boxing history”.

Both slammed sickening punches to the other’s head, leaving Hagler with blood pumping out of a deep gash.

Hagler emerged from that early skirmish looking as if someone had ripped at his face with a can opener. At the end of the round the referee Richard Steele, alarmed at the amount of claret cascading down Hagler’s face, asked him, “Can you see?” Hagler snapped back: “Well, I ain’t missing him, am I?”

Just under two rounds later, Steele had to rescue Hearns from being knocked out – or worse.

In the third, immediately after the ringside medic had given Hagler a reprieve, the champion chased after Hearns, catching him with a powerful left and then a right that spun Hearns around and made him stagger back defenceless. Hagler followed him across the ring and landed two more long, solid rights.

Hearns went down and lay unmoving on his back seemingly unconscious, but somehow he staggered to his feet by the count of nine. But his eyes were crossed and his legs were rubbery, and the referee rightly stopped it.

At the weigh-in, Hagler, who had been the undisputed middleweight champion since September 1980, had warned Hearns “You better hope I don’t bleed, it only makes me meaner.”

Hagler subsequently recalled: “Every time I see it, I still get chills up and down my spine. When I look at it, I’m glad it’s over. It was war.”

Plenty of good judges had thought the gangling Hearns might have too much for Hagler. He stood 6ft 1in, unusually tall for a natural welterweight who had stopped 26 of 28 opponents at the poundage before moving up to middleweight.

His trainer, the late Manny Steward, said of him. “Tommy comes into the ring like a leopard, let loose to feed.” But the shaven-headed Hagler was the hungrier beast on that unforgettable night.

Marvin Nathaniel Hagler changed his name legally to Marvelous Marvin in 1986, insisting on the singular spelling of the soubriquet. No doubt because he always was one L of a fighter.

To this day boxing fans continue to talk in awe of the night the two H-bombs went to war.

I have a hunch that after this weekend Golovkin and Alvarez will be bracketed in the same breath.

JUST ABOUT ANYONE who is anyone in boxing has publicly opined about who will prevail in a contest that takes us back to ring reality after the M&M’s pugilistic panto at the T-Mobile Arena. The majority seem to favour classy Canelo but for my two cents worth I think the cannier Triple G will out-manoeuvre and out-body punch the mighty Mexican.

Golovkin is eight years his senior but there is still a spring in his step. He may take one to give two but we have yet to see him wince. But it could go to an enthralling split decision and be the start of another titanic trilogy.

AS A FORMER sports editor of two national Sunday newspapers I was disappointed, to say the least, at the short shrift given in the weekend’s press to the upcoming big fights. No previews, indeed not a single word about either of the contests, both world title fights, one involving a Brit and the other poised to go down in boxing history.

Bad judgement and bad journalism in my view, a slight to genuine fight fans.. But in my day we were not so footy-obsessed and recognised that boxing sells newspapers. It still does.

Order Canelo v Golovkin on BoxNation Box Office via your remote control for £16.95/€21.95. BoxNation’s current paying subscribers, and any new customers that wish to subscribe instead of buying it via BOX OFFICE, will get the fight as part of their monthly subscription..