SAUNDERS FIRES BACK AT LEE COMMENTS 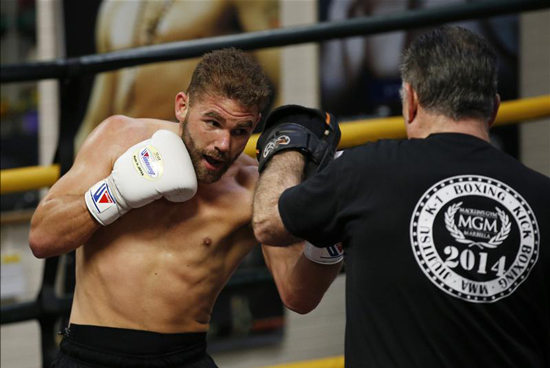 With the fight closing in fast this Saturday night at the Manchester Arena, the tension is cranking up between both camps who come face-to-face tomorrow for the final press conference.

In an interview in today’s Independent, some of the quotes Lee said about his rival were:

“I don’t think it is going to be my hardest fight.”

“He’s an Olympian but I don’t think he did what I did in the amateurs and he hasn’t fought anybody of real note yet. I have fought in the States, across Europe, have more experience,”

“He has never lost, not even lost many rounds, so I have to let him know from the start, let him taste the punches, taste the jab, nullify the things he wants to do. A bit of doubt will creep in and then he will get desperate.”

“I know what’s coming. He doesn’t. For the first time in his life he is going to find out that attitude alone won’t be enough.”

Unbeaten Saunders, who’s heading into his first world title fight, said, “He’s been in big fights in America, yes, but he’s also lost some big fights there as well, Julio Cesar Chavez and Brian Vera.  I’ve not lost yet and I don’t intend on losing,”

“He was getting beat by Matt Korobov until his punch power got him out of trouble and he drew with Peter Quillin which I would have been disgusted with, I go in to win, not draw.

“Saturday night is Lee’s chance to prove if he is a world champion.  I’m the undefeated challenger, if he beats me then I’ll be the first to shake his hand, but as I see it right now there’s only winner, me,”

“There are no doubts in my head at all and he knows that I’m mentally strong and that he can’t get into my head,”

“I’ve was an Olympian at 18 and beaten everyone put in front of me to come through. I’ve beaten everyone in Britain and now I just need Andy Lee who’s just another scalp on my record.”

Remaining tickets for Lee v Saunders priced from £40 are available from frankwarren.com, ticketmaster.co.uk, eventim.co.uk and manchester-arena.co.uk or watch exclusively live on BoxNation. Go to boxnaion.com to subscribe.