SAUNDERS: JACOBS AND QUILLIN ARE TOO SLOW FOR ME, I’D HAVE A FIELD DAY WITH THEM 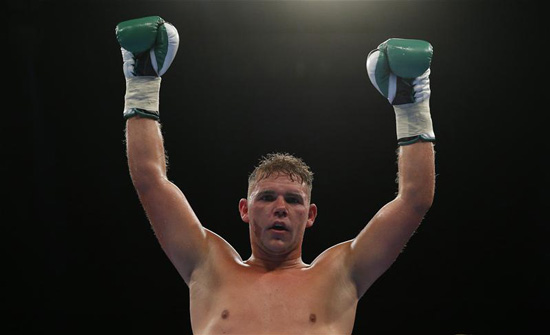 Saunders faces Andy Lee for his WBO crown on Saturday 19 December at the Manchester Arena, but will be watching his rivals closely to see the outcome.
The mega-middleweight fights are coming in thick and fast on BoxNation with Gennady Golovkin v David Lemieux and Miguel Cotto v Saul Alvarez super-fights already televised on the Channel of Champions.
However, Saunders says he’s not worried about the threat that Jacobs or Quillin would pose to him as his lightning hand and foot speed would be too much for them if they met.
“The middleweight division is hotting up nicely now, you’ve got Golovkin, Alvarez, and Cotto is still in there, and now these two lads’ are squaring up tomorrow night,” Said the Hatfield star.
“For me personally if I was fighting either of them, I know I’d be way to fast for them and would have a field day with them, they’re sluggers and too slow, I’m the better boxer and a boxer always beats a puncher,”
“I’d be darting in out and out, plenty of angles, variety of punches from both hands, head movement, I’m not saying I’d knock them out, but I’d comfortably out-punch and out-work them,”
“Jacobs is a good lad and he’s got the title, but I fancy Quillin in this one to beat him because he’s going to walk him down and get the decision,”
“I’ve got to get past Andy Lee first, he’s a good man, but I’m confident of beating him, and I’ve always said my eyes are on Cotto, who’s a hero of mine and I’d love to fight him.”

The Channel Of Champions, BoxNation, will televise Daniel Jacobs v Peter Quillin live and exclusive on Sky 437/HD 490, Virgin 546 and Talk Talk 415.  Subscribe at www.boxnation.com  Or watch online at Livesport.tv and via iPhone, iPad or Android.