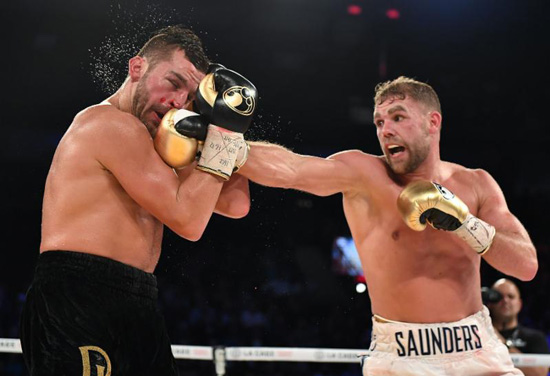 Billy Joe Saunders put on a dazzling boxing display to retain his WBO Middleweight World Title against David Lemieux at the Place Bell in Laval, Quebec, live on BT Sport 2 HD and BoxNation.

Saunders, fighting outside of the United Kingdom for the first time in his professional career, cruised to a unanimous decision in a fight that was incredibly one-sided throughout, thanks to the southpaw’s slick moves.

Hatfield’s Saunders dismantled the home favourite, his hand speed and footwork disarming the powerful Lemieux, who had 33 knockouts in 38 wins before Saturday.

A combination uppercut in the fourth was one highlight, with the Briton then drawing boos from the home crowd after taunting the Canadian for missing shots in the fifth.

He further pressed home his superiority in the seventh, leaving Lemieux bloodied after a series of jabs as he won every round on one judge’s scorecard and defended his title for a third time.

“I knew what sort of fighter David Lemieux is, and I knew what sort of coach he’s got,” said Saunders. “I knew what he was coming for. I look easy to hurt, but you can’t hit me. I like going to somebody’s backyard because I perform better. I’m a whole different animal now. When I hurt David, I wanted to put it on him. I really did, but that’s what I pay my trainer Dominic Ingle to do. I went to put it on him, but he told me to take my time, and that was the best advice.”

“I wasn’t at my best. Hats off to Billy Joe,” said Lemieux. “From the second round on, I could not use my left hand the way I wanted, and he was on the run, so I had a hard time throwing my shots. It wasn’t my best night. A lot of this was because of me, because I couldn’t use my left hand the way I wanted to. He was running from the first round to the end, and I guess that’s his strategy to win. If this is the way you want to win, then congratulations.”

By winning, and doing so easily and impressively, Saunders positioned himself for a possible big-money unification fight against the winner of the expected May 5 rematch between three-belt world champion Gennady Golovkin and Canelo Alvarez. Saunders wants GGG.

“Golovkin, you keep saying you want my WBO belt,” said Saunders, who has the only major belt Golovkin doesn’t have. “Fight me now. You’ll be punching fresh air.”