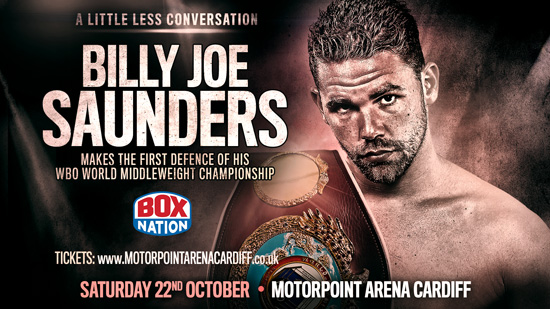 Undefeated WBO World Middleweight Champion Billy Joe Saunders begins his reign with the opening defence of his title on Saturday 22 October at the Motorpoint Arena, Cardiff, exclusively live on BoxNation.

Last December, Saunders defeated Andy Lee to take his WBO crown in a close and absorbing fight in Manchester that saw the Hatfield star floor the Irishman twice in the third round and go on to claim a majority decision from the judges.

The skillful, hard-hitting, southpaw knows it is vital that he makes a successful maiden defence of his WBO crown if he is to remain on track to meet Middleweight monster Gennady Golovkin, who holds the WBA Super, IBF and WBC titles, in a mouth-watering blockbuster clash with all the titles on the line in the New Year.

27 year-old Saunders is delighted to be making his long-awaited return to the ring and is promising Cardiff fight fans an explosive performance.

“I can’t wait to shake the cobwebs off and get back in there where I belong; it’s been too long,” said Saunders. “Every fight is dangerous at this stage so it is important that I don’t overlook or underestimate  anybody. I have worked long and hard to get where I am today and there is some huge fights out there for me.

“I need to take care of this fight and then I’ll move on to bigger and better things. I’m fully focused on the job in hand and putting on an explosive performance down in Cardiff. I can’t wait to get this show on the road!”

An opponent will be announced this week.