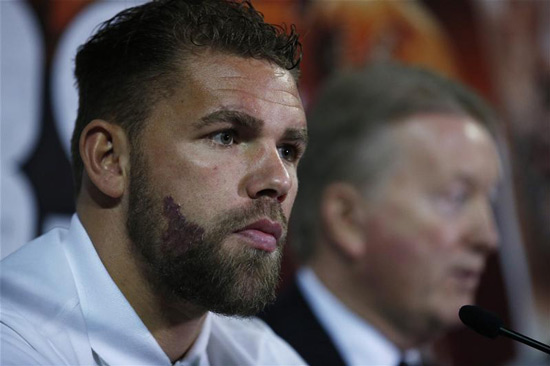 Saunders, 23-0-0 12 KO’s, holds wins other both men and will be providing expert analysis on the evening’s bout. The undefeated Hatfield star is hoping to witness Eubank Jr’s second career loss.

“I can’t say I’m too excited about seeing his ugly face. I’m going to be supporting Nick Blackwell and I hope he knocks Eubank out spark cold,” said Saunders.

“Nick is probably one of the nicest blokes I’ve met in boxing. I’ve shared the ring with him and he’s a tough fighter. He’s a very respectful kid and you don’t see him knocking out beginners in sparring,” Saunders added.

Eubank passed up a shot at WBA world champion Daniel Jacobs in order to take on Blackwell, 25. The Brighton middleweight has completely written off Blackwell’s chances and announced beating him would be for the good of British boxing; Saunders disagrees.

Saunders, who’s preparing for the first defence of his WBO World Middleweight title against Max Bursak on Saturday 30th April at the Copper Box Arena, said: “The best result is for Nick to do his talking in the ring. He’s got a very good chance of beating him. Eubank struggles at the weight and as we saw against Spike he was dying out and got hurt; he could be in trouble on Saturday,”

“If Blackwell can get himself in the fight for the first four or five rounds he’s in with a good chance of winning. He’s got a good work rate and I expect him to come on strong in the second half.”