The winner out of the WBO World Middleweight title showdown between the Champion Andy Lee and challenger Billy Joe Saunders on Saturday 19th December at the Manchester Arena will be hot property on the elite world boxing scene. 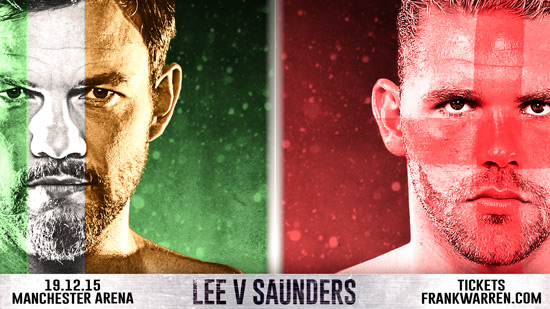 Division ruler Gennady Golovkin, the fearsome Kazakh who holds the IBF World, WBA Super World and WBC Interim World titles, will be targeting the missing belt from his collection, the WBO crown, to complete his mission in unifying all the belts.

The winner of Saunders-Lee could also meet the winner out of the massive WBC World Middleweight clash between Puerto Rican and Mexican rivals Miguel Cotto and Saul Alvarez on November 21 in Las Vegas in a world-title unification.  Plus there’s another big fight in the division with WBA World Champion Daniel Jacobs defending his title against Peter Quillin, who Lee held to a draw in his last fight, on December 5 in New York.  Both fights, plus Lee v Saunders, will be exclusively live on BoxNation.

American superstar and top pound-for-pounder Andre Ward, the reigning WBA Super World Super-Middleweight Champion, has also expressed an interest in the 160lb division and facing whoever emerges as the best in the blue-riband weight class.

With a division bursting with big name fighters and exciting big-money opportunities, Saunders know’s it’s crucial that he wins.

“I keep saying the fight between me and Lee is the most important fight in the middleweight division in recent years and it’s true,” Said the undefeated Hatfield ace.

“It looks like boxing’s elite will be watching with great interest the fight between me and Lee and more importantly who wins as it impacts on what they do in their careers,”

“This is what I’m in boxing for the big super-fights.  Me and Lee is a super-fight, I absolute love it and I can’t wait for what lies ahead,”

“Listen, Lee is a great champion and I’m definitely not underestimating him and he’ll have my total focus, but how can you ignore the big fights that lie ahead for the winner?  Surely that’s a massive golden carrot to aim for and put the pressure on you to fight to your best and win,”

“The winner out of me and Lee is going to be up there amongst the big names, Golovkin, Cotto and Alvarez and if Ward is looking at fighting at the weight then it’s another superstar name in the 160lb pot, it’s going to be a red hot time in the middleweight division in the next year or so that’s why I’m going all out to win on December 19 and get that belt around my waist.”