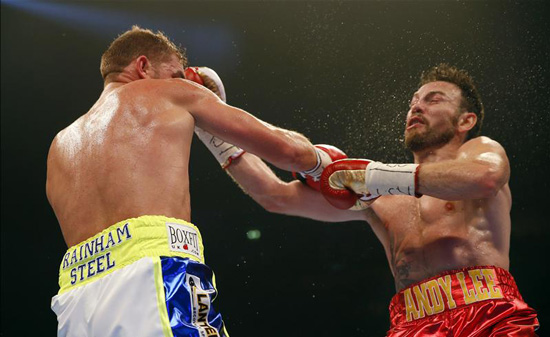 The Hatfield Star dropped Lee twice in third round, but went on to out-think and out-box the Limerick puncher for the remainder of the fight.

Saunders, a 2008 Olympian and a former British, Commonwealth and European Middleweight Champion, said, “I can’t believe that I’m finally world champion.  It’s been my destiny to win a world title and I always knew that I would do it, but it’s unreal that I finally done it.  Andy Lee has my full respect, he a true fighting man and the better man won, I know he will come again, he must be disappointed losing his world title, but he’ll come again.  He was a hard man and I thought I had him in the third round, but he showed what a tough man he is and made me rethink my plans, but it showed I can adapt at world level.  I’m having a good rest over Christmas with my kids who I haven’t seen over the last six weeks and then I’m ready to look forward to a big 2016 and I’ll fight anybody out there.  I’d like to thank my promoter Frank Warren who has been with me since day one and delivered everything he said he would.  Also a big thanks to my trainer Jimmy Tibbs and his son Mark who have been with me since the beginning and for this fight we’ve been together for 24/7 for six weeks and they have put me through hell, but I know everything they did was for my good.”

In the joint top of the bill, Liam Smith successfully defended his WBO World Super-Welterweight title for the first time against Jimmy Kelly. 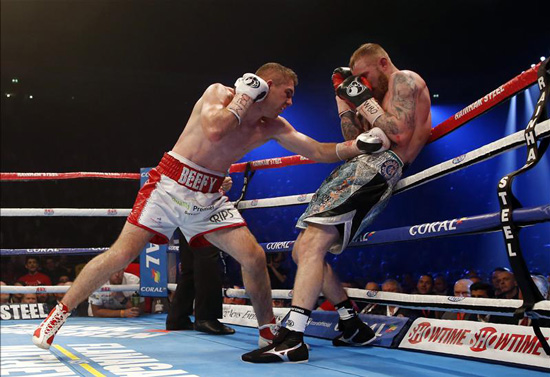 In the first Manchester v Liverpool world title showdown in over 80 years, Smith blasted out his unbeaten rival with a seventh round stoppage.

The unbeaten Liverpool ace broke down Kelly with powerful body shots and showed his power and accuracy.

He put together some hard, close, combination punching that sapped Kelly’s strength and resolve.  In the sixth with Kelly getting desperate, he launched a head butt on Smith and was deducted two points.

In the next round the referee called a halt when Kelly’s trainer Ensley Bingham waved the towel signalling his man had had enough.

A delighted Smith said afterwards, “Kelly put up a tough challenge, but I knew that I was levels above him.  I was comfortable in there and I started breaking him down from the beginning and I knew I was hurting him when I was landing the body shots. He was a hard man and was hanging in there and I said to his corner to pull their man out.  They did in the seventh, I’m sure Kelly can build himself back up again.  As for me, I’d love a unification fight in 2016, I know there are big fights on the horizon and I can’t wait.”
FULL RESULTS FROM THE MANCHESTER ARENA
6 X 3 Minute Rounds Super-Welterweight Contest
JOE SELKIRK WKO1 (2:20) ZOLTAN TURAI