SCOUSE STARLET ‘SUPER SAM’ MAXWELL: “I WANNA MAKE IT A TRILOGY WITH LOMACHENKO!” 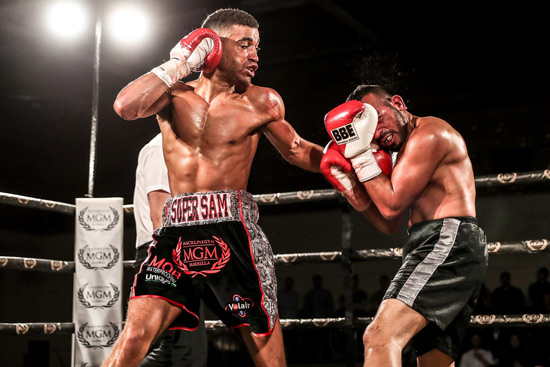 One time GB amateur standout Sam Maxwell has no cause to fear any of the runners or riders in Britain’s white hot super-lightweight division.

Five years ago, the MTK managed Merseysider twice dipped between the ropes to confront the Ukraine’s formidable dual Olympic champion Vasyl Lomachenko over five rounds and remained vertical throughout.

Now unbeaten in six as a pro, the straight-shooting stylist is chasing ‘Loma’s’ tail in the commercial code.

You were born in Hackney, east London before moving to Prescot (eight miles east of Liverpool city centre)when you were eight. Must’ve been tough growing up on Merseyside with a Cockney accent.
Not really. I grew up in a good area surrounded by the right people. When you’re young you have to prove yourself but I was basically a mellow kid, a bit of a nerd. From 11, I was always training at the boxing gym rather than out on the streets.

Remind us of your amateur credentials.
I had about 150 bouts and won around 120. In addition to my (2014) Commonwealth Games bronze, I won the National Universities gold, two Senior ABAs and a British title, beating (2016 GB Olympian)Joey Cordina in the final. I also beat (undefeated pros) Josh Kelly and Josh Leather.

I spent five years on the Team GB set-up in Sheffield. I travelled all around the world, Russia, Ukraine, Mexico, Morocco, Algeria, Brazil and made some amazing friends who I still communicate with on a daily basis.

At the 2012 Olympic qualifiers, I beat the number one seed Albert Selimov from Russia – the only man to defeat Vasyl Lomachenko in almost 400 amateur bouts – but then lost to the Turk in Turkey. That was gutting. I also had 13 bouts in the WSB during two seasons with the GB Lionhearts and won about half of them.

It was in the World Series of Boxing that you twice swapped leather with a certain V.Lomachenko from the Ukraine!
Yeah. First fight I was a bit overwhelmed. I was supposed to fight someone else but there was a ‘pull out’ and ‘Loma’ was thrown on me at short notice. I did much better second time and it was a great experience. I’ve always got that on my CV.

He’s just an unbelievable talent; his feints, his angles, his intelligence. He’s always a few steps ahead of you, knows your movements before you do. He just destroys opponents mentally. That’s why they all ‘No Mas’!

I went 10 rounds with him and got paid about 400 quid for the two fights combined. You could put a good few noughts on the end of that if we ever meet in the pros. I definitely wanna make it a trilogy (laughs)!

You’ve made a storming start to your pro career since debuting in October 2016, winning six straight with five victims failing to finish.
The WSB acclimatizes you to fighting five rounds at a high pace against class opposition. You learn to save your energy, use the jab, avoid the heads.

I know from the pads that I have the power to hurt anyone with my long jab and back hand. I stopped barely a handful in the amateurs. However, it’s very hard to land a clean strong shot against the top amateurs whereas, in the pros, almost every shot connects with power. George (Vaughan, his veteran coach)has taught me not to be so bouncy and awkward. He’s really got me believing in myself.

You’re already 29 so might be required to make your move quicker than most. What’s the SP?
I’m with a great promoter in Frank Warren. Each fight his team ensure I face a better opponent yet I’m dealing with them and getting a bit more hype each time.

The domestic light-welter division is littered with talent like Josh Taylor who beat me in the (2014) Commonwealth Games semis plus Jack Catterall, Tyrone Nurse, Ohara Davies, Glenn Foot and Josh Leather. I believe I’m a very good boxer and a stiff puncher myself. There’s loads of entertaining fights to be made down the line.

There’s no need to rush but it’s great to see so many of my Team GB squad mates doing so well and fighting for titles before they’ve reached ten pro fights. Hopefully, it won’t be long before I’m joining them. I rate myself just as highly.

What can the packed Belfast crowd expect to see from Sam Maxwell on Saturday night?
The Irish fans are amazing so it’s crucial I look good before such a knowledgeable crowd. Hopefully, they’ll see a technically sound boxer, with a tight guard, good feet, a sharp jab and good power in my straight right hand.

I was in the ExCel (Arena) for the London Olympics when Katie Taylor was boxing and it was just unreal, a sea of green. Frampton is their favourite star so hopefully I can get on before him and really savour the atmosphere. I can’t wait.

I always train to do the rounds but if I clip ‘em clean and see they’re hurt, I won’t back off. My fight’s scheduled for six so hopefully I can showcase my skills, get four good rounds under my belt to bank for later in my career, then put ‘em away in style in the fifth or sixth.

WBO Bantamweight Champion of the World Zolani Tete also features as he makes the second defence of his title against former three-time World Champion Omar Andres Narvaez after his Word recording-breaking KO win at the SSE Arena in November.

WBO European Champion Conrad Cummings and Irish champion Luke Keeler go toe to toe in what promises to be an all-action Middleweight affair while Tyrone McKenna and Light-Welterweight rival Anthony Upton clash in an exciting all-Belfast match-up; with Belfast’s Marco McCullough keeping busy after Jono Carroll’s injury forced him to pull out of their IBF Intercontinental showdown.