SHARP TO TAKE ON McCORRY ON 02 BLOCKBUSTER 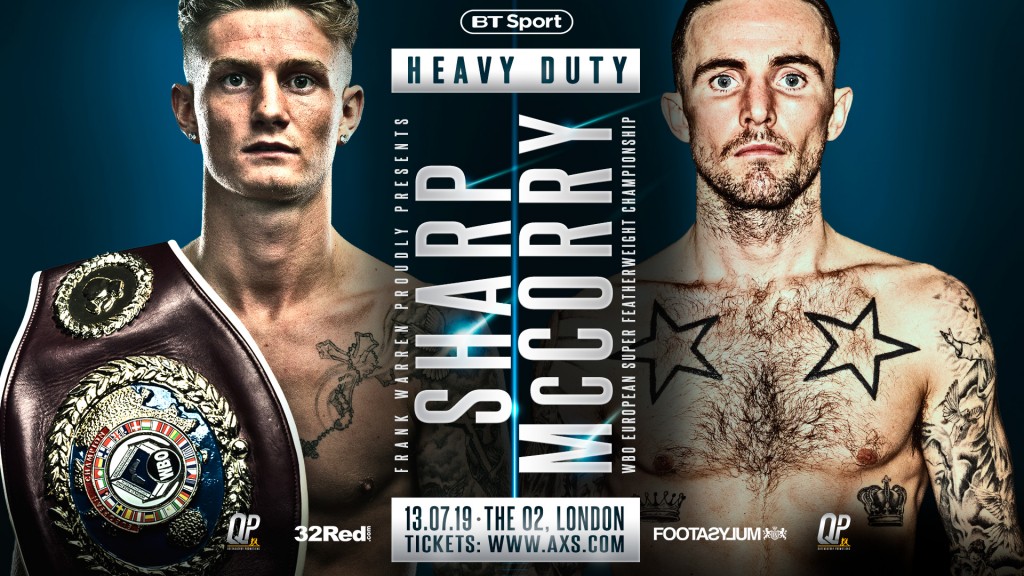 ARCHIE SHARP WILL make a first defence of his WBO European super featherweight title when he takes on the tough Scot Jordan McCorry at The O2, London on July 13.

The 24-year-old from Welling, 15-0, who memorably defeated Lyon Woodstock last October to win his first title belt, knows he will have to be at his quick-footed best to overcome a challenger who gave British champion Sam Bowen a troublesome night before succumbing to a ninth round TKO in his last fight in March.

“It is a good fight, Jordan McCorry is going to come to beat me and he is going to be fit, strong and ready,” said Sharp on his slot on a blockbuster card headlined by Daniel Dubois and Nathan Gorman battling it out for the British heavyweight title and Joe Joyce coming up against Bryant Jennings.

“I am pretty sure he will be coming to try and rough me up, but we are prepared for all sorts of styles coming our way and I am looking forward to the fight. It will be a good win on the night for me.

“I have watched probably about a minute of his fight against Bowen to see what sort of fighter he is. Of course I would like to do a better job than Bowen because everybody wants to make big statements and I will do what I’ve got to do on the night.

“I think Jordan McCorry is made for a good Archie Sharp to come out and shine. I think you will see a good me and I believe his style will suit me down to a tee.”

“That is why you are in boxing – you want the big fights,” said the native of Cambuslang. “You want to be on the big shows and top bills and this is definitely the case here.

“I think I kind of earned it when I fought Bowen. It was a good fight and I think you will see a better me this time because obviously I have had more time to prepare.

“It could have been a different story against Bowen if the referee had let it go a wee bit more, but sometimes you will get that as the away boxer.

“I definitely take a lot from the fight, I spoke to Bowen after and he is a good guy who I hope goes on to do well, but I think everybody underestimated me and thought I would just fall over.

“People saw what I am all about and they will see more this time,” added the Scot, who believes he is up against a more technical opponent on July 13.

“Although, no disrespect to Lyon Woodstock, but he is the only guy he has fought in a hard fight and he is already talking about world titles on Twitter. I am in front of him now and I showed before that I am no mug and I am there to win the fight and that’s it.

“He needs to get by me first. I just think I will be too big and too strong for him.”

Classy Conteh and Fearless Freddie must be Anthony’s yardstick