Vijender Singh finally met childhood hero Naseem Hamed and the British ring legend has told the Indian sensation he can become the next big Asian superstar.

Singh was at the Emirates Stadium yesterday to watch Arsenal’s 3-0 victory over Manchester United alongside promoter Frank Warren and Naz. 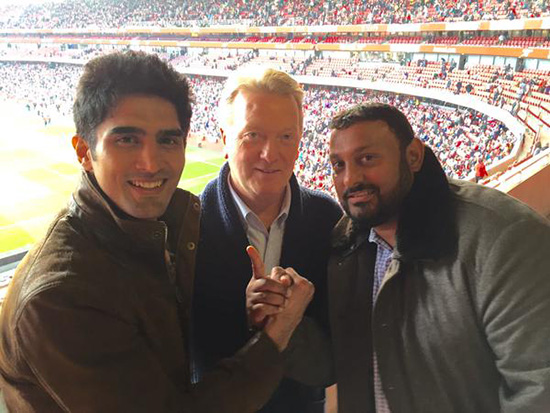 The 29-year-old, from Haryana, India, has based himself in Manchester for his four-round middleweight professional debut this Saturday against Sonny Whiting at the Manchester Arena.

He has been credited with the explosion in popularity of boxing in his home nation and with his fighting skills, model looks and engaging personality, he can become a world star.

Naz, a former three-time world champion and global sensation in the 1990s, believes that Singh can become just as big as Filipino great Manny Pacquiao.

“Naseem Hamed was massive, massive, influence on my career, he was my idol and the reason I got into boxing,” Said Singh.

“He was awesome.  Everything about him, the ring entrances, the knockout power, the entertainment, he was a superstar, everybody around the world watched him fight,”

“So it was a real honour to meet him at the Emirates Stadium face-to-face and have a good chat with him,”

“Of course, he has been on top of the boxing world and the advice he gave was very sound and I took it all in as I’m now starting out on my professional career,”

“Manny Pacquiao is a major Asian star and he said there is no reason why I cannot become just as big as him, but first and foremost I’m a boxer and it is what I do in the ring that counts, everything else is secondary,”

“Professional boxing is just starting now in India and I believe that in the next few years you will start seeing some very good professional boxers coming through on the world scene,”

“I’m very excited for Saturday night, I’ve trained so hard for this and I can’t wait to get in the ring.”