Vijender Singh was honoured at the House of Commons this week when he was invited to meet Leicester MP Keith Vaz.

Labour MP Vaz, who is hugely influential within the British Asian community, is a massive supporter of the Indian Olympic Bronze medallist and called upon British Indians around the country to get behind Singh’s career in the pro ranks. 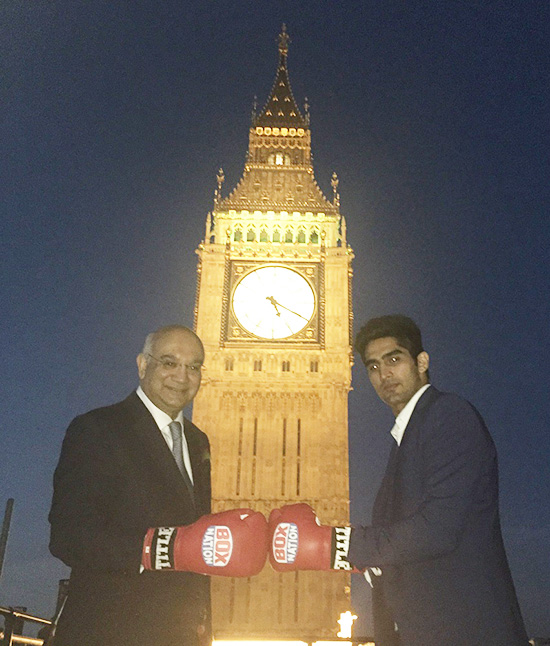 Mr. Vaz said “ I think boxing is very much like politics, it’s tough, and we the British Inidan community have to support Vijender in his career.”

Singh, a superstar in his native India, and their first ever Olympic games boxing medallist, ironically has been yet to be politically honoured in his homeland, although Mr Vaz yesterday suggested he would set about changing that by putting in a good word with his high ranking Indian government contacts.

Vaz also mentioned that Singh’s professional boxing career is an important step towards getting young British Indian’s involved in sport.

“All Indian parents want their children to become doctors. But Vijender’s success can attract more young British Indians to get involved in sport.”

Singh dubbed the ‘V-Bomber’ was delighted at the invitation to parliament saying:

“I am very proud to be here and look forward to helping to build interest of the British Indian in the sport of boxing and sport in general.”

Singh’s next bout has been switched from Harrow this week to the National Stadium in Dublin on Saturday week.

Multi-gonged Singh, follows up his explosive pro debut earlier this month with his second professional fight against 2-0 prospect Dean Gillian