London mayor Boris Johnson, who likes to think of himself as a bit of a bruiser, claims to be fight fan though he once admitted to me that he couldn’t name a current British boxer ”I just love watching them biff each other, ” he said. 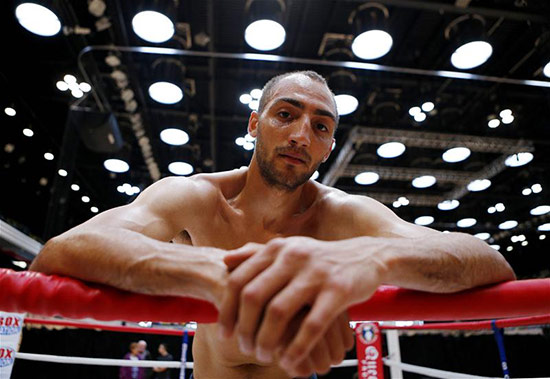 At least his potential successor is somewhat better acquainted with the Noble Art. Sadiq Khan, Labour’s candidate for Boris’s job next May, trained regularly as youngster with Earlsfield ABC , Frank Bruno’s alma mater, in south London. And while he never actually fought in the ring, three of his six brothers did and one of them, popularly known as Sid, is now the club’s head coach.

“I’m an avid boxing enthusiast,“ Sadiq assures me and when asked to name his favourite British boxer he has no hesitation. ”It’s Bradley Skeete.”

The lean and lanky ‘Super’ Skeete from Penge also happens to be a graduate of the Earlsfield academy “He’s a lovely chap,” says Sadiq. ”He and my nephew are best mates – he’s virtually an adopted Khan.”

“My youngest brother Khalid was an ABA champion and so was my nephew Arun. I trained at Earlsfield for many years to keep fit and grew to love the sport, although to be honest I was more of cricketer and footballer. My brothers used to tease me that I was scared to get my nose hit.”

Sadiq follows the sport closely enough to decry the abolition of headguards at senior international and now Olympic level. ”I understand the need to make it more professional and the boxers more identifiable as TV personalities but I think that is outweighed by the risk of eye and head injuries.”

He says he attend the London shows whenever he can – “I love the atmosphere at York Hall” – and still works out on the punchbag – no doubt in preparation for the coming scrap with Tory contender Zac Goldsmith.

Sports Minister Tracey Crouch, another genuine boxing fan by the way, has just spearheaded a new government initiative largely aimed at getting kids over 14 off their backsides and their fingers away from the remote control buttons of their PlayStations, and into gymnasiums and sports clubs.

Hopefully boxing, with its ever-increasng popularity, is high on the list for an extra dollop of Sport England cash.

Lucy is successfully developing the Poseidon Boxing Club, one of the most flourishing centres of of excellence for the sport in the land with burgeoning membership, almost 100 young participants passing through its doors every night since an extension was opened in September.

I have a hunch that the sport minister’s appetite for the boxing was further whetted by the conversation she had about the Poseidon Adventure with Lucy when both were my guests at the recent Boxing Writers’ Dinner.

Lucy certainly knows the business. She is the daughter-in-law of Star Class referee Terry O’Connor, whose son Stuart – her husband – is the Royal Navy boxing coach and helps run the club. Both are serving Navy officers.

Lucy tells us: “We are just about to qualify a group of volunteer coaches as Level 1s so that will help considerably with our delivery.

“We are also working on a disability boxing project in the New Year – making use of our open plan facilities to accommodate a more inclusive group of participants.  We are also due to start delivering BTECs in Sport to 16-18 year- olds from Sept 2016. It makes for a busy life on top of our day jobs!

“We have run a successful programme to encourage women to participate in boxing training – and have seen over 75 ladies taking part in regular sessions over the last three months.”

Poseidon launched in March 2013 with financial assistance from Eastleigh Borough Council and has already won a Sports Club of the Year award, running boxing boot camps and satellite sessions in local schools and community clubs.

Lucy retired as a pioneer female international boxer in 2013 having boxed for GB and England for seven years, during which she was the first British woman to win a European gold medal. She commentated for the BBC on the London 2012 Olympic tournament and is a pretty shrewd boxing analyst, proving again that boxing is by no means only a man’s world.

I’d like to see progressively inclusive BoxNation give her a turn behind the mic.

Once again Boxing News has failed to give to prominence to a Frank Warren double-header world title bill in Manchester- a show which featured Andy Lee’s WBO middleweight defence against Billy Joe Saunders and the domestic duel between Liverpool’s WBO super-welterweight champ Liam Smith against Manchester youngster Jimmy ‘Kilrane’ Kelly. 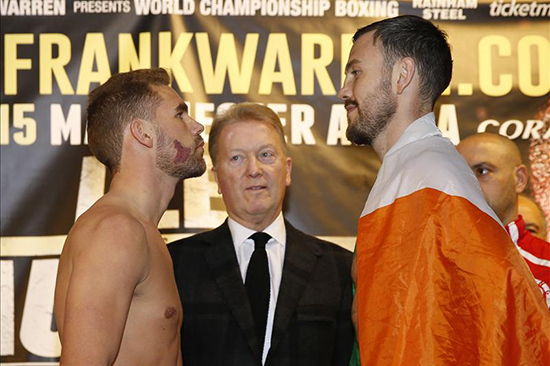 Lee v Saunders was a biggie yet given only a token reference on a front cover dominated by Anthony Joshua’s win over Dillian Whyte. Odd, don’t you think?

Note the name fight fans. Jordan Thompson is a 6ft 7in cruiserweight from Manchester who made his pro debut last week with a stunning first round stoppage of 39-fight veteran Paul Morris.

The fight, at a dinner show in Ashton-under-Lyne, lasted just 1min 58 sec, with Morris battered and finally floored by a right hand that Preston’s Thompson previously employed to smash forehands on the tennis circuit.

The 22-year-old had made the transition from tennis court, where he was a highly promising junior, to boxing ring after finding competing on the Men’s Tour too costly for him to develop further.

Thompson also says he felt there were certain barriers in tennis (“I doubt I would have been allowed to become the next Arthur Ashe”) that don’t exist in boxing.

After a shot spell on unlicensed shows he is now under the expert tutelage of Lee Beard who believes he has the potential to go all the way.

Fighting is certainly in his DNA. Father Geoff Thompson, MBE, who runs the much-praised Youth Charter for Sport in Manchester, is a five-times world karate champion and mother Janice also won world titles in the sport.

I am a Muslim and there is nothing Islamic about killing innocent people in Paris, San Bernardino, or anywhere else in the world. True Muslims know that the ruthless violence of so called Islamic jihadists goes against the very tenets of our religion.

I just want to get in there and beat Eubank jnr up. He thinks he’s invincible at the minute and it’s quite amusing to me, having been in the ring with him before (in sparring). I know he’s not invincible. So does Billy Joe Saunders. I just want the chance to prove it and shock a few people.

Nick Blackwell, whose promoter has won the purse bid for the British title fight, but will it happen?

He said he wasn’t homophobic and suddenly grabbed my beard and kissed me on both cheeks. I’ve changed my mind about him. He’s a big friendly giant who’d float my boat if he was gay.

I thought I was bad with some of the things I’ve said but Fury makes me sound like Mother Teresa!