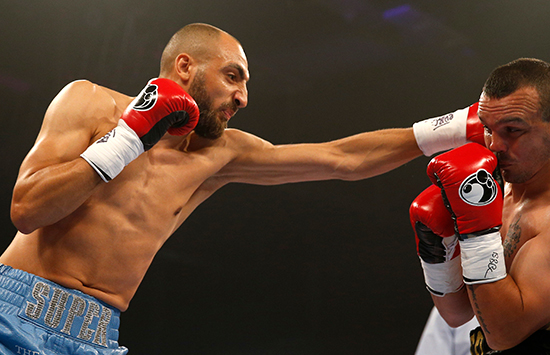 On Saturday April 28th, world rated Penge welter Bradley ‘Super’ Skeete seeks to add the continental crown to the British and Commonwealth titles that already glisten in his cabinet.

The super skilled 6ft stylist jets to Bilbao, Spain to confront undefeated Basque banger Kerman Lajarraga (24-0, 19 stopped) for the vacant EBU strap in the knowledge that victory will cement his standing as a genuine world level operator but defeat will vanquish the 30 year old to the back of the 147lb queue.

Coach Alan Smith, head honcho at the iBox gym in Bromley, explains to Glynn Evans why Team Skeete are rolling the dice.

“After his last fight, Brad copped a fair amount of criticism (for his cautious performance) despite scoring a near shutout against Dale Evans. To be fair, I instructed him to box in that manner because that was the way to beat a puncher like Dale, and win his Lonsdale Belt outright. Dale didn’t commit either – which we didn’t anticipate – and he was challenging for the title. It wasn’t solely Brad’s doing that the fight was boring.

Now that Brad’s secured his Lonsdale Belt outright we’ve got to move on from British level. But no one was queueing up to fight Brad. Decent name contenders were all demanding ridiculous money to come here to fight him. So we’ve had to take a gamble.

But if I could pick an ideal style for Brad to face it’s Lajarraga’s and if Lajarraga could pick a style to avoid, it’d be Bradley Skeete’s. We’re all wrong for him. I’m as confident for this as I was before Brad beat Sam Eggington (to collect the British and Commonwealth titles in a career best performance two years ago).

Going to Bilbao will be no problem whatsoever, provided we get a fair shake with the officials. Apparently, they’re keen to bring ‘Big Time’ boxing back to the region and they’ve got no chance if they ‘stiff us’.

I have to say we were treated very well when we went over there for the press conference. Kerman seems a very nice boy; quite shy and nervous, very polite and humble. He seemed a little shocked by the scale of the occasion.

People will remember that Bradley stood up to a packed and hostile Birmingham crowd when he convincingly beat Eggington and he boxed all around the world alongside your James DeGales, Billy Joe Saunders and Tyson Furys as part of the England (amateur) set-up. Eleven thousand Basques screaming for their man won’t faze him one bit.

I’ve personally watched loads of Lajarraga on tape. He’s a relatively big kid for the weight; tough, very strong physically and can definitely whack. They were all ‘bigging up’ his power over there.

But, from what I’ve seen, he’s a bit predictable. Without going into too much detail, I’ve identified a few technical weaknesses plus he’s been cut a few times. His face was marked up badly at the presser and the fight was delayed a month because he got cut in sparring.

Every opponent Lajarraga has faced had been stopped previously, bar (Hungary’s 20-1-1) Laszlo Toth. And Toth hurt Kerman quite badly. Unless Lajarraga catches Brad with something stupid, I can’t see Skeete coming unstuck. Besides, Brad’s got an incredible chin…..if you can reach it, which ain’t easy.

If it goes badly wrong for us in Spain, Brad knows his world title dreams will go down the swanny but if Brad has serious aspirations of succeeding at world level, he has to be able to deal with your Kerman Lajarragas.

To make a statement and put himself out there, Brad has to do a number on this kid. He can’t be lazy. Brad needs to bring his A Game. He has to win BIG!

But Brad is so confident for this fight. On his best night, Brad absolutely schools him. I can see Brad’s long slashing right hand opening him up like a water melon. I honestly think Brad stops him.”