SMITH AND RADOSEVIC MAKE WEIGHT AHEAD OF WORLD TITLE SHOWDOWN

At today’s official weigh-in at the Bierkeller in Liverpool, undefeated WBO World Super-Welterweight Champion Liam Smith and Montenegrin challenger Predrag Radosevic both hit the weight on the scales ahead of tomorrow’s world title showdown at the Echo Arena. 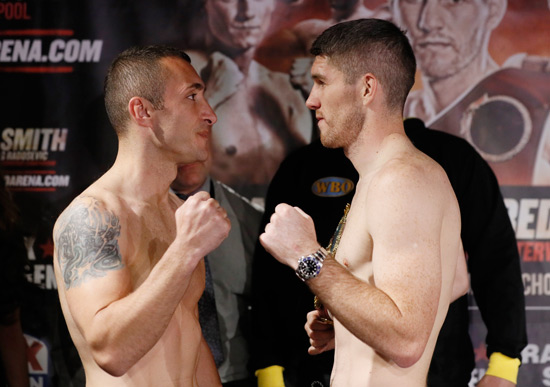 Scouse hero Smith, 22-0-1 12 KO’s, and WBO European Champion Radosevic, 30-1-0 11KO’s, headline tomorrow’s mouth-watering night of action, live and exclusive on BoxNation. Smith, who makes the second defence of his world title, hit the scales bang on 11 stone while his challenger Radosevic came in at 11 stone 13lbs.

Speaking afterwards Smith said: “All the talking is over and now it’s time to get it on in the ring. I’ve put everything into my training and I’m looking forward to retaining my world title in front of my home crowd at the Echo Arena.”

Radosevic said: “My training camp has gone perfectly and now I’m ready to get in the ring and become a world champion. I’ve not come all this way to leave empty-handed. I’m fighting Smith in his own city but I’ll be taking the belt home with once I’ve beaten him.”

Also weighing in at the Bierkeller was Liverpool’s Tom Stalker who challenges Antonio Joao Bento for the Vacant WBO Lightweight Championship. ‘The Captain’ weighed in at 9 stone 8lbs with Bento coming in at the same weight.