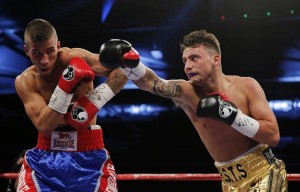 Red-hot British talent Mitchell Smith will step down to featherweight and challenge Chilean Christian Palma for the Vacant WBO Intercontinental title at the SSE Arena, Wembley, on Saturday 9th May.

The Harrow Weald star has been campaigning in the super-featherweight division since turning pro in 2012; winning the Southern Area, English and WBO European titles; a world number 15 ranking in the WBO and an unbeaten 11-fight record.

Smith, 22, sees his future for now in the 126lb division and has set his sights on the world title currently held by Vasyl Lomachenko. A win against Palma will see him crash into the top ten and start working towards the top Ukrainian.

Palma, from Lautaro, has the experience over Mitchell with 30 fights under his belt and has been in with a number of top fighters around the weight. In his last fight in April he extended unbeaten Italian prospect Carmine Tommasone the twelve round distance and big-hitting Smith will be looking to halt Palma to make a statement.

“I’ll definitely be hitting harder and faster in the featherweights and I’ll be showing just what I can do against Palma,” Said Smith.

“I’m still only 22 and as I mature and get physically stronger at least I know that there are two doors open for me at both weights and I could move up again at some point in the future, but right now my future is at featherweight and breaking into the top ten after this fight,”

“Lomachenko is the WBO world champion and the one that I’ve got my sights on. He’s very slick, but I know I’d find a way to win against him. I’m a good few fights away from him yet, but once I win this title he’ll be lighting up on my radar.

“Palma is my first South American opponent and I know he’ll be a tough customer, but it’s a good learning fight for me and I’ll get some experience from it as I’ll improve my game. He extended young prospect Tommasone in his last fight, who’s had a similar amount of fights as me, and a number of other prospects so it will be a good result if I stop him,”

“I’ll be looking for the KO against Palma, if it comes great, but I’m ready to put on a dominant performance over twelve rounds.”