Somebody ring the bell! This is one fight that must be stopped 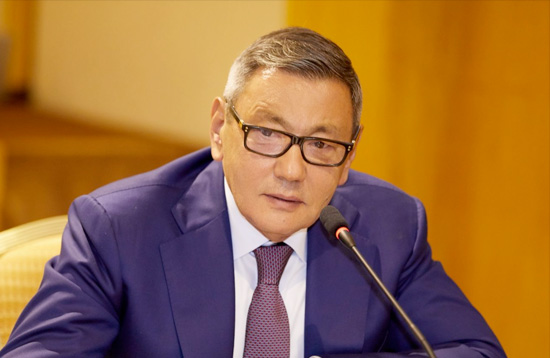 There are fistfuls of big fights for aficionados of the noble art to look forward to this year, among them British heavyweight rivals Anthony Joshua and Tyson Fury hitting the big time in America (alas, not yet hitting each other), fresh world title challenges for ex-champs Billy Joe Saunders and Amir Khan and a contest that will part unify the world middleweight championship between Mexican hard nut Canelo Alvarez and top notch American Danny Jacobs in Las Vegas on May 4.

Bu there is one current scrap which needs a referee to stop it immediately before the sport itself gets seriously damaged.

Mainly it had concerned the recent election of Gafur Rakhimov as AIBA president in defiance of the IOC’s wishes.

It has been well chronicled that Thomas Bach and his Executive Board were deeply unhappy that controversial figure of the 67-year-old from Uzbekistan, who succeeded the now banned-for-life Dr C K Wu, was in charge of a body which received much criticism following worrying judging and refereeing irregularities in the Rio Olympics.

His detractors claim he has links with organised crime, a sort of Eastern European Al Capone, though no proof has been forthcoming.

In 2012, the US Department of the Treasury put financial sanctions on Rakhimov and several other individuals accused of being part of the so-called Brothers Circle criminal organisation.

Yet he has never been charged with any crime in any country. In fact, he has won defamation suits at the high courts in Britain, Australia and France.

So what happened to innocent until proven guilty?

However, Rahkimov has declared his intention to stand down, at least temporarily, in order to allow boxing, as run by AIBA, to take its rightful place in Tokyo next year,

“Given the current situation, I have informed the AIBA Executive Committee of my intent to step aside as AIBA President in accordance with the AIBA Statutes and Bylaws, which allow the President to renounce to exercise his powers and to be replaced by an Interim President,” Rakhimov said in a statement.

Although he has only half fallen on his sword – it is possible he could return as head honcho after the Games – I have never fully understood why the IOC was so dead set against him.

Not only are his sporting credentials as an administrator and coach excellent but boxing is by no means the only Olympic sport which has endured previous questionable leadership with the full blessing of the IOC.

One might even suggest there was as onvenient outbreak of incipient myopia when those in charge of football, athletics and cycling were first subjected to legal and/or moral scrutiny. To name but a few.

And how do we know Mr Rakhimov really is the bad guy he has been labelled?

I have never personally encountered him and I have no idea whether or not he is a really bad lad. Of course the US Treasury department, without any proof, say he is a crook. But why should anyone believe a word that comes out a Trump-land government office these days?

I have met quite a few members of the IOC and I suspect there are some among them who have been, or still are, dodgy dealers, like the former heads of certain international sports bodies. FIFA,, UEFA, UCI and IAAF come to mind.

When that flaky old judge from Senegal who was in charge of world athletics was exposed did the IOC threaten to pull the sport out the Games, or suggest it should be run by an alternative governing body? Did they hell?

In the past the IOC has shown no more qualms about whether anyone heading up sport would pass a fit and proper persons test than the Premier League does when kowtowing to potential open-chequed overseas owners of football clubs.

So I have some sympathy for Rakhimov. He was elected president of AIBA on a democratic vote but as we are now seeing here in the United Kingdom over Brexit, democracy, which the Greeks invented alongside the Olympics, is fast becoming a redundant word.

However as Rakhimov has decided to stand down at least for the duration of the Games, that should be the end of the matter. But the capricious IOC insist on keeping their options open, saying there are still other issues concerning AIBA’s governance to consider.

For too long now the IOC snowflakes have placed a question mark over the future of one of the prime sports of the Games. Surely president Bach must realise that millions of television viewers around the world – not to mention the TV networks who foot the bills – would rather watch two young men – or women – engaging in unarmed combat than they would someone climbing up a wall, or jerkily dancing in the street.

AIBA may still have its faults but it is the best equipped body financially and aesthetically to organise an Olympic boxing tournament. Bruiser Bach should now be telling them to box on.