STACKING UP THE CARDIFF CARD…AND A BULLETIN FROM BEEFY

Our Cardiff card on July 16 is shaping up to become an epic night of boxing for those in the arena and fans tuning in to the exclusive BoxNation broadcast.

The original thinking behind booking the fantastic new Ice Arena was to provide the ideal backdrop for Liam Williams from Clydach Vale to defend his British and Commonwealth titles on home turf against Londoner Gary Corcoran.

Since then the bill has been bolstered by the addition of two world title fights.

The postponement of Tyson Fury’s return with Wladimir Klitschko could have left Terry Flanagan kicking his heels, as he was providing the chief support with a defence of his WBO world lightweight title against the South African Mzonke Fana, a former IBF champion.

I didn’t want to leave him in the lurch and, although it is a costly exercise adding a further layer to our Cardiff cake, it is a bill I am happy to foot to keep Terry ticking over. I wanted to find a solution for him because he is a terrific bloke who I have a lot of time for, so I will always do my best for him.

So we now have a world title double-header on our hands, with Guillermo Rigondeaux booked to fly in to defend his WBA super title against Jazza Dickens. It really is going to be some night with many too close to call matches to look forward to.

The unbeaten Joe Pigford – another promising super welterweight – takes a step up in class by risking his ‘0’ against a previous Corcoran foe Rick Skelton, with the only dent in his 14-1 record coming against the Wembley man.

Predictably, it all got a little spikey when Williams and Corcoran came head to head last week to publicise their super welterweight clash.

There is nothing wrong with a bit of needle – within reason – and genuine mutual disrespect always tees up a fight nicely from a fan’s point of view. Why fight fans like this match-up so much is that nobody can confidently call the outcome, with Liam’s power up against Gary’s marauding workrate.

I know the pair well as they are both from our stable, but even that doesn’t make me any the wiser when it comes to picking a winner. What I do suspect this won’t be a first and last fight between the two, I think it might just be something special that the fans demand we do again.

Bear in mind we also have Ahmet Patterson and Jimmy Kelly to add into the mix, not to mention WBO king Liam Smith at the top of the tree. None of them will set out to avoid each other so it is a division that could well enthral us in the months ahead.

Liam Smith issued a timely little reminder via his Twitter account this week. I suspect Beefy was bristling at suggestions that he is being awarded an ‘opportunity’ against Saul ‘Canelo’ Alvarez – so he took the opportunity to remind people that he is the WBO champion of the world at 154lbs and Canelo is actually the challenger. 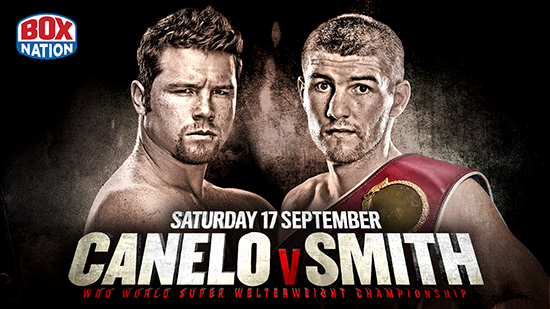 Quite right too. It is well documented that Liam has been craving a marquee fight and Canelo more than ticks all the boxes in that respect, but he will enter the ring as the champion with his own hard-earned spoils on the line.

There is no doubting Canelo’s pedigree and many people have cast Liam in the role of underdog, but this one snaps in hurtful shots and smiles at the same time, he is a young, hungry and very intelligent operator, who will more than step up to the plate.

Liam added a short message for those who think he is on a hiding to nothing on September 17 by stating simply ‘write me off at your peril’. I, along with many others, certainly don’t because this Beefy is reaching his prime and there is much more to come.