STALKER TO CHALLENGE FOR EUROPEAN CROWN 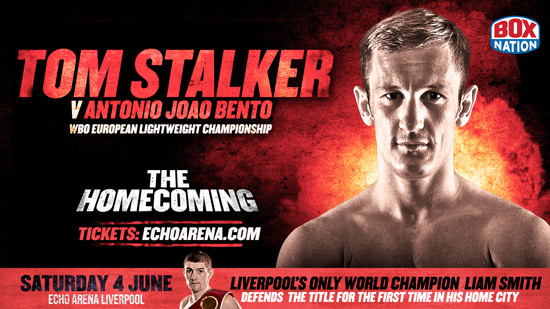 Stalker, 10-1-3 2 KO’s, will be hoping to make it third time lucky against the big-hitting Bento after drawing against Craig Evans in his previous two challenges for the Vacant European belt. 31 year-old Stalker is confident his best is yet to come and hopes a win over Bento will kick-start a big 2016.

“A win would secure me a top ten or fifteen world ranking; it would be massive for me. When I win this belt I’m sure more big fights will follow. I’ve had a good eleven months with my new trainer Danny Vaughan and I feel like everything is coming together now. Even though I’m not a spring chicken anymore in boxing terms I still think I haven’t reached my prime yet. I’m constantly learning and striving to be better,” said Stalker.

Bento, from Olhao, Portugal, boasts an impressive 18 knockouts from 30 career wins and has only been stopped three times in a career spanning over 16 years. ‘The Captain’ has the amateur pedigree after captaining Great Britain’s record-breaking Olympic medal winning boxing squad at London 2012 but it hungrier than ever for his own success in the paid ranks.

He said: “He’s very experienced. He can punch a bit but it’s all about me and what I’ve been doing in the gym. If I deliver come fight night then I’m going to be fine. I’m very confident of winning and then stepping on and being involved some big fights in the lightweight division this year.”

With a rich batch of champions and contenders, boxing in Liverpool is booming. Southpaw Stalker is looking forward to fighting on a huge night of boxing that sees fellow scousers Liam Smith, Ryan Farrag and Jazza Dickens all involved in title fights.

“I’m buzzing to be fighting back in my home city on such a big show. I know I’m going to win this fight and I know I’m going to go on to have a great year. I’m good mates with Liam Smith and all of the Everton Red Triangle lads and it’s always pleasing to see local talent doing so well; it’s going to be a great night for the city of Liverpool.”