Unflappability is the by-word of the boxing MC. This was epitomised by a doyen of the business, the late American Chuck Hull. Announcing a Muhammad Ali fight at Caesars Palace, Las Vegas he called for silence “while Gladys Knight, of Gladys Knight and The Pips, sings our glorious national anthem.” Immediately a shout came from the back of the arena: “Gladys Knight sucks!”

“Nevertheless,” intoned Hull. “She will still sing the national anthem.”

One can imagine similar imperturbability by the modern master of boxing’s ceremonies, Michael Buffer. 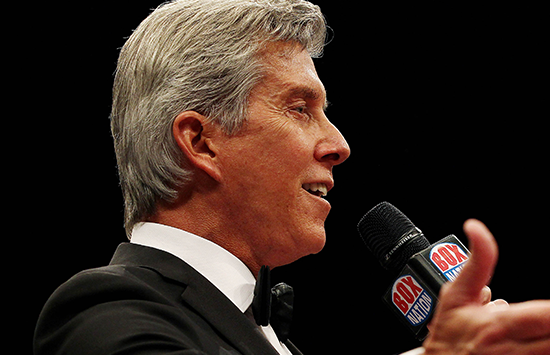 The smooth-talking silver-fox has turned 71 now but watching – and hearing him doing the honours with the mic in Montreal at last weekend’s BoxNation-televised Kovalev-Pascal fight the velvet-toned voice of boxing still resonates loud and clear.

When Buffer, a one-time car salesman from Philadelphia, Hollywood actor and model tells us “Let’s Get Ready to Rumble” he is uttering surely the most evocative – and lucrative – five words in sport.

“And now, for the thousands in attendance and the millions watching around the world, the moment you’ve all been waiting for…”

“Let’s get ready to ruuuuuummmmbbbbllleeee!”

The catchphrase, which has been patented so other MC can’t use it, is estimated to have earned him a $400 million fortune.

During his 35-year announcing career, the thrice-married, immaculately coiffured Vietnam war veteran has introduced baseball’s World Series, ice hockey’s Stanley Cup finals, NBA Championships and NFL play-off games, as well as hundreds of fights around the globe. He has also appeared in a number of fight movies as himself, including Rocky, and latterly, Creed.

Yet it was only eight years ago that he overcame the throat cancer which had threatened his livelihood.

Michael Buffer has probably made more money than the majority of world champions he has announced. Talk about coining a phrase.

There were even other phrases in his early announcing days that have long since been consigned to the scrapheap. He recalls:, “I tried ‘man your battlestations,’ I tried ‘ladies and gentlemen, fasten your seatbelts,’ … but there wasn’t much of a reaction.”

Then he thought back to his hero Muhammad Ali and his pre-fight jive-talk, “I’m ready to rumble.” Buffer adapted Ali’s words, added his own inimitable interpretation and has been thrilling fight fans with them ever since.

It’s become a pre-fight ritual that elicits just as enthusiastic a response from London to Las Vegas via Moscow, New York. Montreal, Berlin and all boxing points east and west of boxing, Las Vegas. It is a phrase which needs no translation.

By trademarking it, Buffer has generated millions in revenue, selling the rights to music, video games, merchandise and making personal appearances. He reckons to make more from the trademark than he does announcing in the ring.

These five words have been patented – no other MC may use them – and his fee for uttering them is said to be $25,000 – $100,000 depending on the magnitude of the promotion. Plus of course first class travel and accommodation.

It is said he was was once paid approaching $1million for a night’s work.

Raised by foster parents in Philadelphia, Buffer was re-united with his biological father and half-brothers in 1989 after his father saw him announcing on television.

One of Buffer’s half-brothers, Bruce is now his business partner and the announcer for the Ultimate Fighting Championship (UFC).

When he was last in London Michael Buffer told how he first got involved in the career that was to make him one of boxing’s best-known personalities.

“I had no clue that this would ever happen. I would watch the fights with my kids back in the early ’80s, and a ring announcer in a fight announced the split decision. And he did it without the proper sequence, to give you the dramatic effect of — ‘and the winner by split decision,’ pause, everybody waits and he gave away this — the winner after two judges.

“And my oldest son said, ‘Dad, you could do that.’ And, and I thought, ‘Well, yeah, OK. I’m a big fan. I can’t afford a ticket, so maybe I could just get my way in to the ring that way.’ And I came up with a sort of enhanced resume that said I had experience, and got my foot in the door and was quite terrible the first time. But I got another shot and it just took off, the power of television.”

Buffer’s only real rival with the mic is the equally likeable but lesser-known Californian Jimmy (Lennon jnr, 57.a lay Baptist preacher who has built his announcing career in the boxing ring over the past 25 years, following his renowned father into the business. Like Buffer he has been inducted into boxing’s Hall of Fame and has his own trademark catchphrase: “It’s Showtime!” 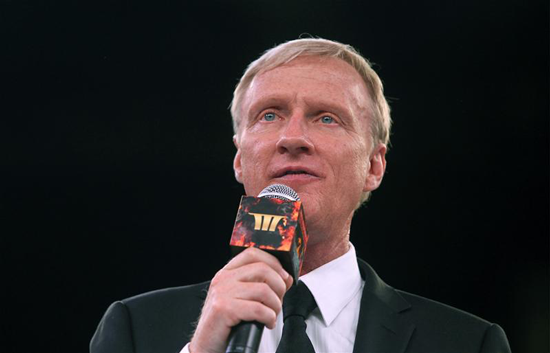 Both add status to any promotion and famously create an air of hushed expectancy when they declare: “Ladies and gentleman, we go to the judges’ scorecards – and we have a split decision…”

Uniquely, they have twice shared split decisions of their own, as twin announcers on shows jointly promoted by rival US TV outfits HBO and Showtime.

First it was Lennox Lewis v Mike Tyson in Memphis in 2002 and last year and Floyd Mayweather jnr v Manny Pacquiao in Vegas, each taking turns to announce their own network’s fighter.

Says promoter Frank Warren: “I know both well, having used them as my big fight MCs on several occasions. Lennon has worked for me in London and Manchester and among Buffer’s many announcing duties here was the David Haye-Dereck Chisora blockbuster at Upton Park.”

That was almost four years ago and the suave operator in the well-tailored tux is as much in demand as ever. He may be 71, but he’s certainly no old Buffer.