Sturm warning in Germany as boxing fights to rope the dopes

It may not have made headlines over here but in Germany it is a major boxing scandal. One of their favourite fighters, Felix Sturm, faces being stripped of his World Boxing Association super-middleweight belt after failing a drug test following his split decision victory against Fedor Chudinov in February. 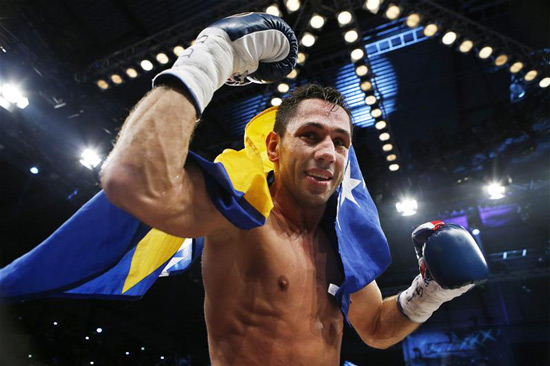 Sturm tested positive for the anabolic steroid stanozolol after the fight on February 20 in Oberhausen. I am shocked. It is disgusting. He’s a cheat and he needs to be slung out of the sport.

We await the result of his B sample test but these are rarely negative. If he’s guilty I hope he gets a life ban for this was the drug made notorious by Canadian sprinter Ben Johnson back at the Seoul Olympics in 1988.

A lot of fighters understandably have a worry about going to Germany. Some strange things happen in a nation where there are disparate governing bodies and dodgy decisions these days, culminating in this.

Sturm got one of these highly suss verdicts so, if the veteran German is proven guilty of a doping offence, I hope the WBA give Russia’s Chudinov his belt back.

Sturm was given the decision against the previously unbeaten Chudinov – he’s the guy who beat Frank Buglioni on my promotion last year – on the cards of two judges, while one scored it a draw. His victory made him the first German to be a world champion five times, having also held the WBA and WBO middleweight titles.

What worries me is that drugs are creeping more and more into boxing and there seem to be ways to avoid getting caught, as indeed there are in other sports.

According to recent reports a large number of top sports figures are, or have been, “at it” with performance-enhancing drugs and the majority are getting away with it thanks to masking agents and other medical subterfuge.

For instance, a bulletin on failed drugs tests is regularly dispatched by the government – backed agency UK Ant-Doping. Boxers – amateur and pro – have figured with increasing prominence.

Almost every week this list features players from another game I love – rugby – though never a name you might recognise. It is usually a minor club or junior player.

Yet I am certainly not alone in suspecting that there are some very big fish in the game whose physical stature and stamina have been enhanced by more than bench presses and power-lifting. Are they all clean – or just clever?

Worryingly doping is becoming as much a scourge in boxing as it has been for some time in other major sports.

A well-known British boxer, a household name, is said to be among the 150 sports figures to have received illegal stimulants from a dodgy doctor exposed in a Sunday newspaper recently.

As I say, drugs are becoming a menace in boxing.

Not that we should be too hasty to point the finger.

For instance, the Australian heavyweight Lucas Browne now has a bigger fight on his hands than the one in which he ripped the WBA title from Uzbekistan’s Ruslan Chaegev in Grozny, Chechyna last month.

Browne tested positive for banned fat-burner clenbuterol after the fight yet he had passed a random blood and urine test six days before in Australia and another urine test again the day before the bout in Grozny, something he had personally requested.

As his team point out, Browne ate only at the hotel provided by the promotion and drank sealed bottled water. All very odd.

Browne, according to his promoter Ricky Hatton, who is utterly convinced of his innocence, has even passed an independent polygraph, or lie detector, test.

I tend to agree with Lucas and Ricky that this just doesn’t stack up. There is certainly something fishy about what happened in Chechnya. The stuff he was supposed to be taking was a fat burner and would not have made an iota of difference had it been ingested just before the fight.

The inference is that Browne’s food or drink was somehow spiked. Chaegev, a favourite of the fight-loving Chechynan President, was strongly fancied to hold on to the title.

It seems to me he was stitched up and quite rightly the WBA are investigating.