“There’s Only One Ricky Hatton,” chorused the Mancunian masses after their beloved Hitman’s glory nights – and even after some of the less glorious one, too.

If you listened hard at the Manchester Arena last Saturday night you could have heard the strains of “There’s Only One Terry Turbo.”

It is a refrain that will grow louder and louder as Fight City’s new Hitman briskly strides along the path of world domination. 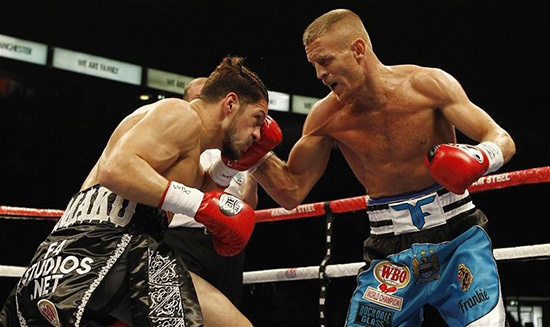 I am in unison with those singing the praises of boxing’s latest sensation. Terry Flanagan’s two-rounds destruction of leading contender Diego Magdaleno in the first defence of his WBO World Lightweight title – coupled with Liam Smith’s equally brilliant acquisition of the vacant WBO World Super-Welterweight belt – was one of the finest exhibitions of ruthless finishing I have witnessed in a British ring for some time.

It was one of which the original Hitman himself would have been thrilled to execute.

Unfortunately, supportive as he has been of the fellow Mancunian who once revered him as his boyhood hero, and is now a pal, Hatton couldn’t be at ringside to witness it.

Quite rightly he was on duty as a promoter/trainer at his own show in Walsall but he sent Flanagan an encouraging good luck message and subsequently paid this tribute: “It was a wonderful performance –a great night for Terry and Manchester. I’m made up for him and very proud.

“Do I see a bit of myself in him? Yes, I do. He has the same steely determination and will win. He really surprised everyone, didn’t he?”

Indeed he did – not least a bemused Magdaleno.

Flanagan is not as flamboyant as Hatton and their styles – and lifestyles – differ in and out of the ring.

But with his undoubted talent and punching power he could become as marketable. 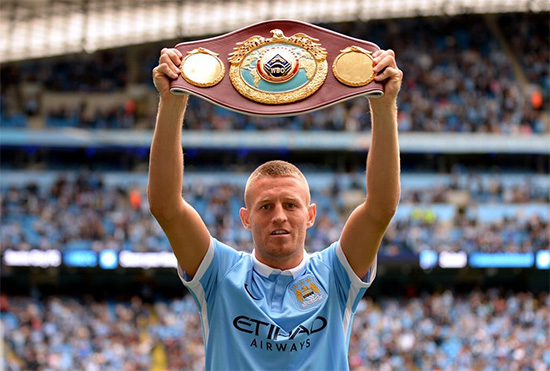 “We’re very proud of where we come from, us Mancunians. He’s just a local lad done well, no different to me. He won’t let being world champion go to his head.

“I won the world title and did what I did. I was born five minutes down the road from here on a council estate. I’ve got my gym here and my house there and Terry is the same.

“Success can change people sometimes, but I don’t think it will change him. He’s just a Manchester lad done well.”

It is well chronicled how as a kid Flanagan sneaked in to watch his hero Ricky Hatton famously defeat Kostya Tszyu at the same packed arena 10 years ago.

“I still look up to him as a legend,” Flanagan tells us. “Other people say when they meet their heroes, they are disappointed, but I thought he’s a sound guy.

“Hopefully I can emulate what he did. He genuinely wants me to do well. I was there willing him on, so it’s great to have him behind me now.”

A week after one of his most memorable nights in his 30 years of promoting world title fights Frank Warren is still bubbling with appreciation of Flanagan’s performance. He says: “I’ve had many great nights with Ricky Hatton at the Manchester Arena and there are going to be many more ahead with Terry. I’m really excited about the future.

“We started with crowds of three, four and five thousand for Ricky and it just got bigger and bigger until that night that he beat Kostya Tszyu.”

I was among those who saw Hatton’s finest hour a decade ago, a night Manchester boxing fans will never forget as the Hitman dramatically dethroned the Ironman in dramatic style to secure the IBF World Light-Welterweight crown and propel himself towards global stardom.

In a viciously pulsating battle, the Siberian-born, Aussie-domiciled Tszyu quit on his stool after 11 rounds of searing assaults from Hatton, who was a huge underdog on the night.

It was the moment American boxing writers dubbed Hatton as ‘The Manchester Mexican’ for his exciting, come-forward style.

Hatton believes it was his greatest moment, admitting that he was never quite as motivated again. “Once you have climbed Mount Everest, you have to really try and psyche yourself up to get going again,” he says.

“I achieved my Everest with that Tszyu fight.

“I trained harder than I’d ever done and there were no corners cut. But the hunger I had before the Tszyu fight wasn’t the same before I fought Floyd Mayweather and then Manny Pacquiao. It was different, but I can’t put my finger on it.

“I’d reached a stage of comfort. By the time of the Mayweather fight, I was Ricky Fatton. I’d been going up and down in weight since I was 18. My body had been through it. I had a lot of defences of the WBU title and maybe it all took its toll. I certainly didn’t feel fresh.

“Tszyu was universally recognised as the undisputed champion at 140lbs. Oscar De La Hoya described him as a knockout machine and he was. He was such a spiteful, horrible puncher.

“We only boxed for the IBF title, but he never lost the other two. He vacated them. He was one of the best light welterweights of all-time.

“When he tried to hit me low, he got it back straight away, tenfold. In close I was able to maul him and push him around and take that right hand away. If he hit me on the back of the head, I’d do the same to him. I don’t think he expected that because he’d had so many clean wins with that right hand. I beat him at his own game. He was a monster, but I monstered him that night.

Making a comeback is among the most emotive phrases in sport. Usually it happens when a sports personality is either broke or bored, and, more often than not, it all ends in tears.
Seven years on Hatton was to make that well-trodden journey. On Saturday November 24th 2005 Manchester Arena again rocked to the roars of “There’s Only One Ricky Hatton” as the hubris-fuelled, 34-year-old Hitman made what many considered an ill-advised return to the ring against a former world champion, the smart, strong Ukrainian Viacheslav Senchenko.

It was a bold, and eminently risky match-up when Hatton so easily could have taken a much softer touch for his return to the ring after his three years absence. But it said much for his character.

He did not need the money. He was reputed to be worth £26 million after a career that saw him become arguably Britain’s most idolised and best-supported world champion.

What he did need was the restoration of his pride and dignity following those devastating defeats by Mayweather and Pacquiao, and personal redemption after plunging to the depths of despair which saw him succumb to drink, drugs, binge-eating and brought him to the brink of suicide.

But most of all he missed the roar of the crowd.

The most famous – and certainly the most hyped – comeback in British boxing history concluded mournfully. Just as he did in his previous fight against Pacquiao three years earlier he ended up on the floor, knocked out in the ninth of a 10-round contest.

The ending was the one we feared, Hatton’s attempt at redemption culminating in a crushing defeat, writhing in agony from a wicked left hook to the ribs.

It left him gasping for air and although his 20,000 passionate fans urged him to rise and beat the count, he struggled to his knees but couldn’t make it. He needed medical attention and the crowd was hushed but they applauded him – as did Senchenko – as he left the ring for the last time.

He looked positively skeletal, drawn and gaunt from his massive weight reduction – five stones lost since his boozing and binging days. Although he came out fighting like the old Hatton, it transpired that this time he was to be more the Miss Man than the Hitman.

Hatton immediately recognised that he had thrown the last dice. “I’m a happy man because I’ve found the answer I needed,” he said afterwards. “I gave it my best shot but it wasn’t the old me in there.

“I’m not going to kid myself. It just wasn’t there any more. But I still feel I’m a winner. I’m not going to put myself and my family through that again. But I did all I could. I looked at myself in the mirror and knew it was over. So thank you everyone, that’s the end of Ricky Hatton.”

Of course it wasn’t. Ricky has re-invented himself as an international promoter and excellent trainer and as such remains one of the most effervescent and popular personalities in the sport. 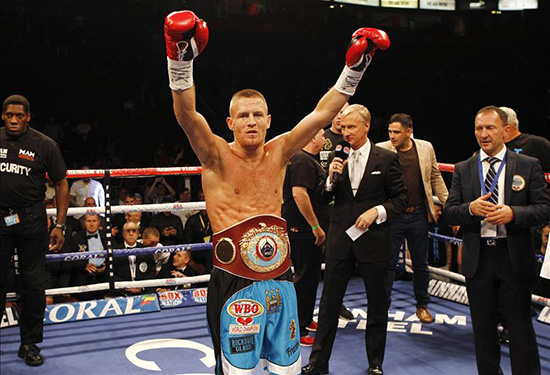 But more than anyone he knows boxing can be a life of literal ups and downs…as doubtless his new fan-turned-friend Terry Flanagan will experience in time.

But the way The Turbo is super-charging on, we can anticipate many more ups than downs from Hitman II.