SUPER FIGHTS AHEAD FOR THE SUPER LIGHTWEIGHTS 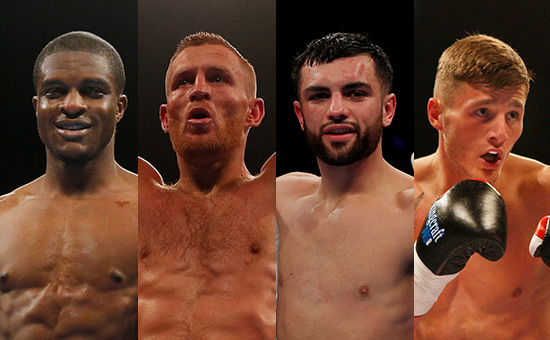 WE CAREFULLY MANAGED to prise Ohara Davies from under a double decker last week and handed him a ticket to ride in the thriving super lightweight division.

I am delighted to bring him onboard and we can now extend the great thing we have got going at the weight involving Terry Flanagan, Jack Catterall and Josh Leather.

Terry is bidding to win the WBO world super lightweight – light welter in old money – title against Maurice Hooker on the big 02 bill on April 24 – a show on which Ohara will also be putting his marker down.

Should Terry be successful you can be pretty sure our other contenders will be jostling for position to challenge him in an all-British world title dust-up in the near future.

Jack, as British champion and a fine young fighter who I have long banged the drum for, holds a strong ranking with the WBO and will be pushing to be head of the queue.

He has done everything that has been asked of him so far and is becoming a genuine threat to those currently sitting at the top table.

Josh is ranked in the top 15 of the IBF world rankings and also looking to propel himself towards contention, so it just shows the strength we have at the weight in this country.

Everyone is a fan of the big domestic blockbusters and, like we are doing in the featherweight division, we will also make the fights that sort out the super lightweight pecking order.

The natural rivalries are all there along with a promising package of fights for us all to look forward to.

I believe Ohara to be a real talent and I would like him to become recognised for this as opposed to the notoriety he has gained for his supposed cyber crimes.

His online activities have been well documented and there is no need to go through it all again, but I believe his explanation regarding the most recent furore I also understand that his Twitter activity was under orders because that is how some people operate and it is the same MO right down the line.

At the end of the day he then got hung out to dry by people who were supposed to be protecting him.

He doesn’t need to be some sort of pantomime villain to be successful in this business and it was pleasing to hear him on BoxNation explaining that the winning of titles is now his overriding priority.

Now he can just get on with being himself and show everybody what he has got and if he is as good as he says he is.

THE WELCOME MAT wasn’t just rolled out for Ohara last week as we are also delighted to announce that the talented Jamie Branch has been added to our ranks.

Jamie – who is currently hovering between light heavy and cruiserweight – enjoyed an outstanding amateur career, where he was six-times national champion and a member of the Team GB squad.

Only injury prevented the 22-year-old product of the Repton Boxing Club from competing at the Olympics and now he is eager to take the plunge into the pros.

The elusive southpaw – who holds a victory over Lawrence Okolie in the amateurs – will make his debut on April 14 at the 02 and is certainly one to keep an eye out for.

LEE SELBY HAS probably never been booed so much in the space of a few days as he was last week.

First of all we all headed to Leeds for the opening press conference to formally announce the IBF world featherweight title showdown between Lee and his mandatory challenger Josh Warrington.

He was well and truly given the bird – in a light-hearted fashion – by a number of Josh’s fans who were in attendance and he took it in good spirits.

Josh was in his element and handled it all really well, as you might expect, while Lee is not the most boisterous or outgoing of individuals and he doesn’t give much away at the best of times.

In the head to head Josh looked very, very confident with it all, so we will see.

Fair play to Lee for returning to the Elland Road fortress to face the flak once again on Saturday – stepping out onto the pitch to be greeted by another chorus of boos.

I suppose at least he had the last laugh on this occasion, given that his team Cardiff clinched a 4-1 victory on their travels.

It is all set up for a quality fight and I suspect tensions will only rise between the two guys as we get nearer to the fight.