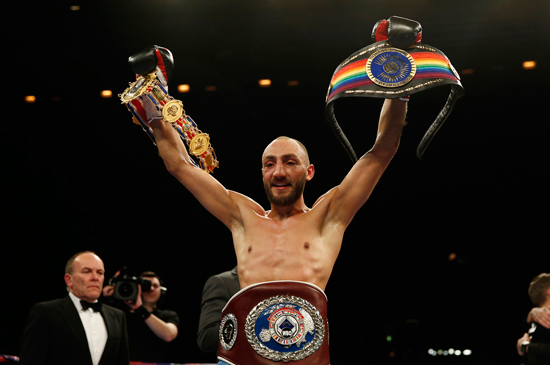 South London’s red-hot 6ft 1in talent picked up his first title win when he defeated Chas Symonds by a round four TKO, claiming the Southern Area title back in 2012. Since then the hugely popular iBox Gym fighter has climbed to the very top of the domestic Welterweight scene and now has a World title in his sights.

“I’m delighted to have signed a new deal with Frank Warren that will take me in to 2019,” said Skeete. “I started my career with Dean Powell and I’ve been a pro now for just over six years. I’m really happy with the progress that I’ve made in that time.

“I have the British title now and my immediate aim is to win that outright and then move on to World honours in 2017. My rankings are really high now, I’m ranked fourth with the IBF and sixth with the WBO and I’m going from strength to strength.”

“With the news of BT Sport signing a deal with Frank and BoxNation it’s a really exciting time to be involved in the sport. I’m showing loyalty to Frank and the team and I’m sure in the long run it’s going to pay off.

Multimedia and telecommunications giant BT recently signed a landmark multi-year deal with Hall of Famer Warren and his pioneering boxing channel BoxNation. The ground-breaking deal will see Warren promote 20 UK events a year, broadcast to millions via BT Sport and BoxNation. Skeete is looking forward to a busy 2017.

“I’m a BoxNation fighter through and through and the extra exposure I’m going to get fighting on BT Sport is going to be massive for me,” added Skeete. “BoxNation has been developing really well over the past few years and I’m really excited about what the future holds. British boxing is on the up and things can only get better.”

Skeete, 29, tops a huge night of boxing at the Brentwood Centre next Friday and is promising to end a memorable 2016 on a high note. Penge punch-picker Skeete completely outboxed and outclassed Birmingham’s Sam Eggington in his backyard to claim the British title back in March and is now determined to win it outright.

“Obviously I was supposed to fight my mandatory challenger Shayne Singleton but he pulled out and fair play to John Thain for stepping in. I want to keep this belt outright and he’s in my way of doing that. I’ll be putting on a strong performance and then going through the list to win it for keeps.

“Me and Andy (Ayling) had a deal that when I won the British title he’d buy me a Rolex watch. He promised me it and he’s a man of his word, I’ve got my watch and I’m well happy! I need to think of another present he’s going to buy me when I win a World title!”

Remaining tickets for November 25 can be purchased from: http://www.ticketmaster.co.uk/event/1F005127E2BBBE0E

BRING BOXING OUT OF ISOLATION

INVITATION TO MY 40TH