SUSSING OUT THE OPPOSITION 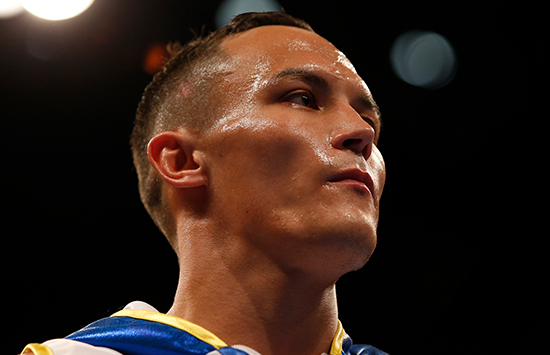 Having been ringside assessing the opposition in recent weeks, Josh Warrington is perfectly placed to run the rule over the domestic featherweight scene and he duly takes up the theme in his latest exclusive Fighter Diary column…

WITH HAVING MY pundit’s hat on over the last few weeks I have seen my potential opposition up close in both Belfast and London.

It is difficult to make a genuine assessment. Frampton, after a long layoff, took on a kid (Horacio Garcia) I didn’t know much about before, to be honest with you. It ended up being a tough night for him.

In the first couple of rounds I thought ‘wow’ because he was looking sharp and like he’d never been away. He then dwindled over a couple of rounds from four to six and, all of a sudden, he was just fighting to hear the final bell.

It did make you wonder what would have happened if there were a couple more rounds in the fight.

Let’s not forget, Frampton has had a very good career and has had some tough fights. Maybe the shots he hit Garcia with would’ve done more damage at super bantam than they do at featherweight. I know it is only four pounds difference but some fighters don’t carry that big punch up.

He needed the fight though and he has had a lot going on outside the ring with him changing his team around. That can play on your mind a bit.

I know he won’t have been too happy with the performance, but he got the win and can start looking towards getting back into the world title mix.

Lee Selby, again he started well and, again, he just quietened down. I don’t want to sound too much like I want to go against him, but I can’t evaluate it and say he put on a brilliant performance.

The fact he is a world champion and a hunted one means you have got to show your class. Even though in the early rounds he did, you’ve got to keep it going for 12 rounds.

He seemed really desperate to get the knockout and it slowed him down because he was putting everything into every punch.

There is no way that he went into the fight thinking it was only a tickover. This is boxing and anything can happen so why would you?

Don’t get me wrong, when there is a bit more spite in the fight or a bit more on the line, it might give you a kick up the backside, but you still should perform to the optimum.

It doesn’t do my own confidence any harm because I feel I am getting into my peak and timing is everything.

Whilst I am not regarded as a world class featherweight at the minute because I haven’t won a world title, I am knocking on the door and ready to come in all guns blazing.

Time will tell if I am a world class featherweight, but I believe so and there are a lot of people around me who believe so too.

This time next year as we approach Christmas I will be known not just in this country as one of the best featherweights, but also around the world.

We shall see, but I am only 27, whereas Lee and Carl are both 30. I am just getting into my prime years and they have been there for a while now.