Terry Flanagan will need to crank up his Turbo a notch or two should we be successful in ticking off the next couple of entries on his wish list.

Manchester’s finest did what he had to do in order to overcome the threat presented by the very capable Petr Petrov at his local arena on Saturday night but, with Terry, you always get the feeling he has plenty left in reserve.

I know Terry frustrates his trainer Steve Maylett – and probably himself at times – by not cutting loose and letting his hands go more when the going is good.

It could be a mindset issue where you fall for the temptation of just doing enough to win, rather than making a statement and showing everybody what you are really all about.

Petrov is no mug and this was a risky fifth defence of his WBO world lightweight title. The highly regarded Felix Verdejo opted to give the Russian a swerve, but Terry insisted on seeing if he had his measure.

Ultimately, as has always been the case up to now, Terry was too good for him, but once he had his number, he ended up going through the motions to claim a comprehensive victory on the cards.

Terry believes the time is now right for him to step into elite company against opponents who will genuinely force him to extend himself.

He suspects – and I go along with his thinking – that being put under the cosh by a fellow top dog of the division will result in him having to dig deep and bring the best out of himself.

The names are no secret, the elite boys in and around Terry’s weight category are Jorge Linares, Mikey Garcia and, if he chooses to move up, Vasyl Lomachenko. 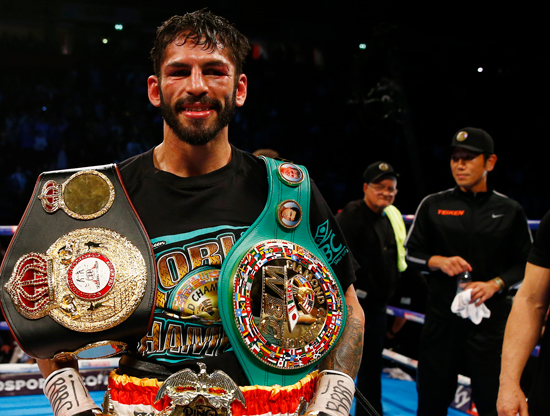 We actually reached agreement for a fight with Linares before but unfortunately a contractual option for a rematch with Anthony Crolla was exercised and he was more emphatic in his victory second time around.

We will now see if we can get that deal back on the table because he would be first pick for Terry this summer.

The Venezuelan is well known and popular with British fans and beating him would earn Terry the respect he so richly deserves.

There is the possibility that the WBC will attempt to force a match between Linares and Garcia in order to tidy up their title situation, with Garcia the holder of the main belt and Linares the ‘Diamond’ version.

Should this be the case, Terry has no problem with entertaining the prospect of taking on perhaps the most formidable force of all.

Lomachenko was once again stunning in his execution of Jason Sosa at the weekend – a fight shown live on BoxNation – and afterwards he name checked Terry when questioned over his next assignment.

This is something we have been talking with Bob Arum about and if he fancies a trip to Manchester for a taste of the Turbo, Terry would be more than happy to accommodate him.