TETE: “THERE SHOULD BE ONE KING OF THE BANTAMWEIGHTS!” 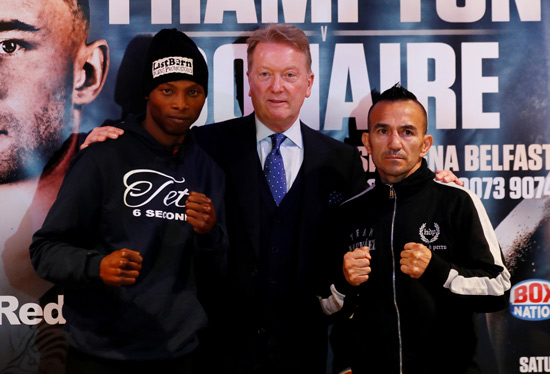 Tete, 30, is chasing a unification showdown with WBA ‘Super’ Bantamweight Champion Burnett and is determined to prove that he is the real king of the 118lbs division by defeating the Belfast native.

“I would love to have the fight with Burnett, even if they said it would be my last ever fight,” said Tete. “I would grab it with both hands. I believe the fight needs to happen before the end of the year.

“There should be one king of the Bantamweights. I believe there are two at the moment so one needs to be eliminated.”

Narvaez (48-2-2, 25 KO) is 5-0 since a rare loss to Japanese superstar Naoya Inoue. He has held the WBO Flyweight and Super-Flyweight World Titles and will be aiming to become a three-weight World Champion by defeating Tete.”

Tete is prepared for a tough fight, adding: “I’m fighting a good fighter. He is very experienced and it is going to be a great fight. Don’t blink because there is going to be fireworks.”

WBO European Champion Conrad Cummings and Irish champion Luke Keeler go toe to toe in what promises to be an all-action Middleweight affair while Tyrone McKenna and Light-Welterweight rival Anthony Upton clash in an exciting all-Belfast match-up; with Belfast’s Marco McCullough keeping busy after Jono Carroll’s injury forced him to pull out of their IBF Intercontinental showdown.

Carl Frampton and Nonito Donaire, along with fighters on the undercard, will perform public workouts at the Victoria Square Shopping Centre in Belfast from 1.00pm onwards.

The ring will be located on Level 2, next to Odeon.

Brief one-on-one interview and photo opportunities are available with all fighters and their teams.

Fighters will hit the scales from 2.00pm at the Europa Hotel.

If you have any queries relating to the Fight Week schedule please contact danielbarnard@frankwarren.com