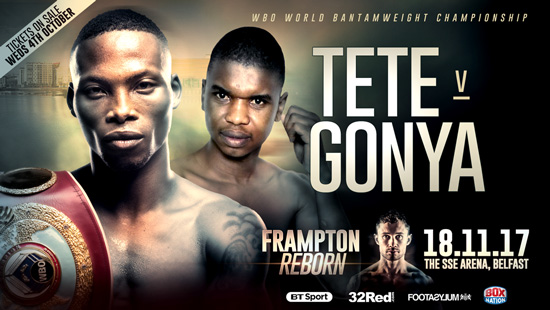 His Final Eliminator for the WBO World Bantamweight title at the Leicester Arena in April against Arthur Villanueva was upgraded to an Interim title fight by the governing body after the Champion Marlon Tapales was stripped of his belt.

Tete duly won the Interim belt, outscoring Villanueva by a wide margin. He oozed class over 12 rounds on his way to an emphatic points win over Filipino Villanueva. After 12 rounds, and dropping Villanueva in the eleventh, Tete secured a unanimous decision with scores of 120-107 and 119-108 (twice).

In another interesting twist, the WBO then elevated Tete to full World Champion status whilst he was on his flight home to South Africa. With the win, Tete became a two-weight World Champion, following his devastating KO victory against Ellesmere Port’s Paul Butler for the IBF Super-Flyweight title at the Echo Arena Liverpool back in 2015.

He now stands as one of the most dangerous fighters in the World, possessing a ram rod jab and one punch knockout power that poses a threat to any of the current World Champions in his weight class and has led to 20 KO’s in 25 wins.

Gonya, the reigning WBO Intercontinental Bantamweight Champion, is third in line for Tete’s World Title. The 25-year-old, who hails from the Kwazulu-Natal province, holds a record of 11-1 (5 KOs) and is relishing the challenge of fighting the best in his division.

“I’m delighted to be making the first defence of my World Title in Belfast,” said Tete. “I’ll be looking to make a statement in Ryan Burnett’s hometown as I know this is a fight my team tried to make for me but he didn’t want to know. I have the beating of all of the Bantamweight World Champions.

“I believe myself and Burnett would provide fans with a brilliant fight, I know the people Belfast love their boxing and hopefully this is a fight that can be made when we both come through our next fights. For now all of my focus is on Siboniso Gonya on November 18.

“He is a good fighter and I am looking forward to testing myself against him. He is a fellow South African but there are no friends inside the ring. I hope he will put up a good fight but I will be heading back to South Africa with my belt around my waist.”

“I have wanted this fight badly for some time and I am delighted that I finally have the chance to test myself against a fighter of Tete’s calibre,” said Gonya. “He is a two-weight World Champion and one of the most avoided fighters in the World.

“Whilst other fighters have avoided him, I am relishing the opportunity to take his World Title from him. The odds will be stacked in his favour but I am a warrior and this is my moment. I believe it is my destiny to win a World Title.”

Tickets for Frampton Reborn will go on sale to the general public at 12 noon on Wednesday 4th October via the SSE Arena Belfast Box Office, www.ssearenabelfast.com and 028 9073 9074.