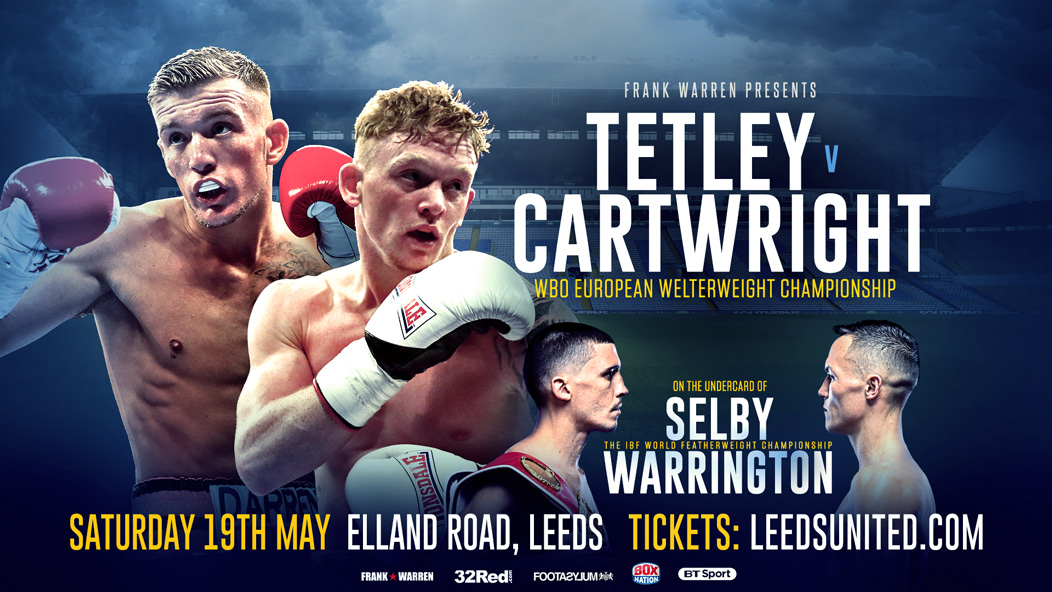 Darren Tetley and Mason Cartwright will clash for the vacant WBO European Welterweight title on the undercard of the blockbuster IBF Featherweight World Title showdown between Lee Selby and Josh Warrington at Elland Road on May 19th.

Bradford’s Tetley, who has won all fifteen of his professional bouts, stopping six opponents, is determined to claim his first belt before targeting a shot at the British Welterweight title currently held by Bradley Skeete later in the year.

“This is a fight that has got a lot of people excited,” said Tetley. “Two undefeated prospects are putting it all on the line, it has all the makings of a great fight. This is a massive fight for me and one that I’ll shine in.

“Cartwright is a good fighter and likes to come forward, I’m expecting him to put it on me from the very first bell. If they think I’m going to shy away from a fight then they’ve got another thing coming.

“He’s coming down from Light-Middleweight so I reckon he’ll try and blast me out of there early. When it gets to the late rounds and I’m still right there in front of him I can see myself taking him out.”

Ellesmere Port’s Cartwright (13-0-1, 5 KO’s) is fresh from a two-round destruction of Zaurs Sadihovs at the BT Convention Centre in Liverpool and is predicting another show-stopping KO win over Tetley next month.

“I’m ready for this step up,” said Cartwright. “This is an amazing opportunity and I’m going to grab it with both hands. If I win this belt I’ll get a World ranking with the WBO and that’s a huge incentive for me.

“Fighting in front of thousands of people at an historic stadium like Elland Road is going to be a special experience and it’s a real chance to get my name out there and show people what I can do.”

Elsewhere on a huge evening of boxing in Leeds, double Olympic Champion Nicola Adams OBE fights for the fourth time as a professional as she continues to work towards a World Title shot.

Further exciting undercard additions will be announced in the coming days.