TETLEY: “IT’S A FACT THAT I’VE A BIGGER KNOCKOUT PERCENTAGE THAN CARTWRIGHT!” 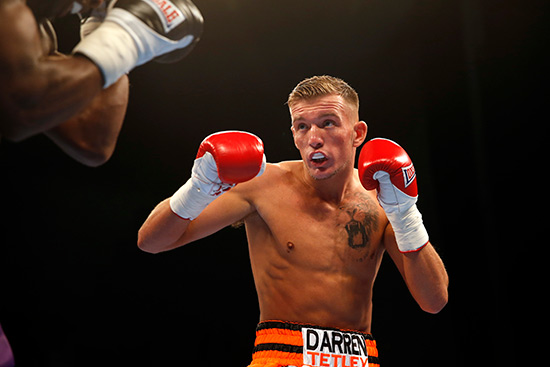 The fight fancy might be styling Saturday week’s vacant WBO European clash between unbeaten welters Darren Tetley and Mason Cartwright as a classic boxer versus fighter clash but Bradford’s Tetley insists he has the edge in both power and panache ahead of the salivating War of the Roses rumble.

‘Mason’s dropping down from light-middle so will be strong but if strength is all he’s banking on, he’ll come up short, very short! Scott Quigg’s greater strength didn’t win over against Carl Frampton. Strong and tough are not enough!’ insists the stylish 5ft 11in southpaw who arrives fresh off a two knockdown second round slaughter of Liverpool’s useful Terry Needham last October.

‘My boxing brain beats Mason but I’ll not be running away. I’ll be pushing him back and when I land a proper shot, he’ll be shocked. It’s a fact that I’ve a bigger knockout percentage than Cartwright has.’

Though the colliding prospects are undefeated in 29 fights combined, both shall be making their championship debuts in this warm-up to the Lee Selby- Josh Warrington world featherweight title showdown before a five-figure audience at Leeds United’s Elland Road stadium.

However, the 24 year old Bradford scaffolder has successfully negotiated the eight round trip twice, while Ellesmere Port’s Cartwright is yet to venture beyond round six.

‘This is my breakout fight, by far the biggest event of my career and easily the most ‘up for it’ that I’ve been since joining the pros,’ insists ‘TNT’ Tetley, a multiple national junior champion and former Commonwealth Games Youth silver medallist who has racked up 15 straight wins, with six stoppages, since entering the profession back in November 2013.

‘Not many get to have their first title fight at a massive stadium. I’ve told myself: Savour the build-up. Enjoy the interviews, enjoy the occasion.

‘I’ve sold over £12,000 of tickets and can’t thank my supporters enough.  It’s certainly handy that I’m only 20 minutes down the road but I don’t really think of it as having home advantage. We’ll both have a lot of support.

‘Previously when I’ve boxed at the First Direct Arena in Leeds (on five occasions), I’ve either been first or last on and there was never much atmosphere. This time, I expect it to be pretty full but I never feel any pressure. I just do it cos I love a fight.’

Flame haired firebrand Cartwright is yet to concede in 14 – one technical draw – but Tetley insists he has put in the graft required to front the challenge.

‘I’ve been sparring my gym mate Tom Young who recently got to the final of the Ultimate Boxxer. He’s very similar to Mason, even looks like him, same hair, loads of tattoos,’ says the married father of two who is mentored by ex-pro Mick Marsden at the Body Mania gym in Rothwell.

‘We expect Cartwright will storm out and try to steam roll me and we’re fully prepared for that. We fully expect him to be fit, as will I. I expect it to turn into the fight of the night.  I want a black eye to make me look harder!

‘But I’m not the type to get discouraged if I don’t get rid of an opponent early. I done eight very hard rounds with (Poland’s) Lucasz Janik and smashed my hands on his concrete head. I’ve trained for 10 hard rounds against someone continually in my face.

‘From his Twitter tweets, it appears Mason fights with a lot of emotion, banging his fists and the bag. But if he piles forward, he’ll just walk onto my educated punches and eventually I’ll get to him.
‘My grandad passed away last week. When I have the belt I want him to look down and know that I did it for him.’