THE BIG DADDY OF BOXING 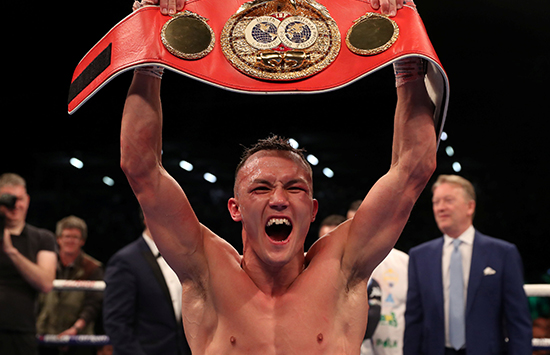 NEW: Our fighting talk feature on what’s said and done inside – and outside – of the ropes, this week featuring Josh Warrington on his non-existent bonus system and Boy Jones jr adopting a novel approach to the sale of tickets…

NO SOONER HAD Josh Warrington memorably defeated Lee Selby to take ownership of the IBF world featherweight title, his trainer – and father – Sean O’Hagan let it be known that he was after a win bonus in the shape of a new camper van in recognition of his own efforts on a remarkable journey that has taken his son to 27-0 and a world champion, by way of the English, Commonwealth, British, European and WBC International titles.

The jovial giant and architect of the masterplan to overthrow a long-standing champion in Selby, was quick to make public his shopping list while the Champagne was still flowing at Elland Road in May.

So is the father of the champion now the proud owner of a shiny new camper van?

“No!” exclaimed Josh when we caught up with him this week. “He is still waiting on a bonus and I don’t know where this bonus talk came from. It wasn’t negotiated and he just put it on me that he was getting one.

“I said we will unify titles and then he will get a bonus,” added the Leeds hero, who his father has previously stated – albeit tongue in cheek – is known for being a bit, er, frugal, on the financial front.

“Yeah, but I look after him and he knows that,” countered Josh. “You just can’t please him though, he is forever taking, that man…

“He has had a bonus, but I make him work for them though.”

His longing for a mobile holiday home wasn’t the only thing Sean wanted to put out there amid the jubilation of the mission accomplished in Leeds. The trainer-father was happy to be able to silence the doubters, those who have continually written off the father-son team’s chances of reaching the pinnacle of the sport.

Josh, for one, certainly doesn’t underestimate the boxing brain of the operation.

“He is definitely underrated in terms of his boxing knowledge and the way he goes about game plans,” he reasoned. “I think most people just see him as all smiling, having a laugh and not taking things too seriously, but really behind closed doors it is a little bit different.

“Obviously he has been with me since day one and we have been through thick and thin together. It has been a helluva ride and the way that breaks down fights when he is studying them is top drawer and he is one of the best about in that.

“He has always kept himself quiet and let results do the talking, but when his boxer reached the top of the tree he probably said what has been on his mind for a long time.

“Nobody has ever really given him any credit and, back in the early days, a lot of people were saying Josh Warrington really needs to consider his team if he wants to progress.

“I always said if it is not broke then why fix it?

“We’re successful, we have a 100 per cent winning record, we have done nothing wrong and there was no need to change it.

“On May 19 he proved again tactically how good of a trainer he is.”

IN THIS DAY and age it is part and parcel of a boxer’s duties to assist as much as they can to make shows a success and help in the bid to put bums on seats.

They need to be persuasive, persistent and, in the case of Boy Jones jr, opportunistic and prepared to chance your arm when you spot a potential new market.

Most people would probably imagine the lightweight to be of a similar stature when it comes to keeping track of parliamentary comings and goings, but his finger was firmly enough on the political pulse to be aware of the departure of the Foreign Secretary and kindly offered to fill a void in his evening.

“You okay @BorisJohnson now you’ve not got a job I’m guessing your gonna be free this Friday?” tweeted the Chingford charmer ahead of his appearance at York Hall last week, where he recorded his 17th victory as a professional.

“Fancy coming to my fight at York hall, lots of other fights are on!

You can only ask.